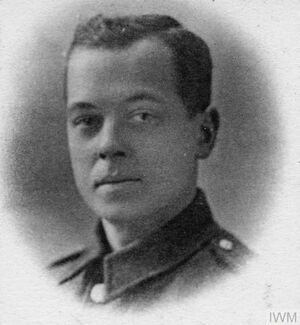 Franklin Dyson, born in 1888, was the only child of Fred and Clara Dyson. Fred was a weaver, born in Lockwood and Clara was from Lindley and they were married in St. Stephen's church on 8 January 1887. Clara was the daughter of Dyson Whiteley, who was a farmer and whose father was the landlord of the Black Bull in Lindley. Dyson himself took over as landlord after the death of his father. By 1901 he was living at 15 Bichencliffe Road (as it was then known), next-door but one to Fred and Clara.

It seems likely that Franklin attended Birchencliffe Infant School at the bottom of the hill and then the church school in the centre of the Lindley. By 1901, at the age of thirteen, he had left school and was working as a setter for a warper, in a worsted mill. By the time he was 23 he was described as a "Worsted Warper". This was probably at Martin's on Plover Road, the firm he worked for when he entered the army.

In early 1915 at Halifax, Franklin married Ethel Hoyle — and they went to live at Quarry Bank, Mount, which gave Franklin a brisk walk down the New Hey Road to Martin's Mill at Oakes. Ethel may have been the sister of Fred Hoyle, the husband of Edith Whiteley, Franklin's aunt and neighbour on Birchencliffe Road.

We do not know precisely when Franklin joined the army. The fact that he was not a young man in 1914 — he was aged 27 — and may have been courting Ethel at the time, suggests he did rush to enlist. He may have waited to be conscripted.

A boy named Harold Dyson whose mother's maiden name was Hoyle was born in the Huddersfield area in October 1915 and this would fit time-wise. Hoyle and Dyson are not uncommon local names but I have not identified any other Hoyle/Dyson wedding: it seems likely Franklin had a son.

The 9th Battalion the West Yorkshire regiment was a Service Battalion of Kitchener's army and it seems likely that Franklin joined it as a replacement after conscription — it had been in Gallipoli until mid 1916 and then arrived in France without returning to Britain.

Franklin was presumed to have died on 9 October 1917 when the battalion was engaged in the Ypres area. This presumption may have only been confirmed much later: Franklin is recorded on the absent voters list compiled in late 1918.

A total payment of £4 11s. 11d., including war gratuity, was sent to Ethel, along with a weekly pension to be surrendered if she re-married. There is no evidence that Ethel ever married again.

Franklin has no known grave but is remembered on the Tyne Cot memorial and on the memorials at Salendine Nook Baptist Church and at St. Philip's, Birchencliffe, his parents' parish church.

When Clara, who still lived on Birchencliffe Hill, died in October 1955 at the Mill Hill Hospital, Huddersfield, she left her small estate to Dyson Whiteley, "wire drawer", a nephew, and this fact may imply that Franklin never had a son, though he may have died earlier.[2]