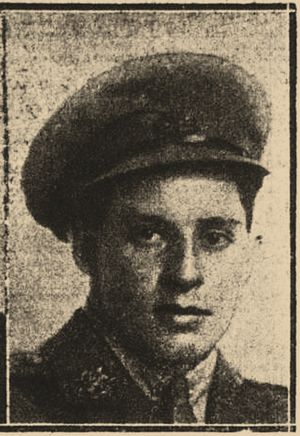 THORNTON, FRANK. 2nd Lieutenant. 'C' Company 7th Battalion East Yorkshire Regiment. Born Birkby, Huddersfield, 3.4.1893. Son of Mr and Mrs William Thornton, 'Ashfield', Fenay Bridge, Huddersfield, and later of 12 South Parade, Llandudno, North Wales. Educated Almondbury Grammar School and The Leys School, Cambridge, where he was in the Officers' Training Corps. Employed as a traveller in his father's business, Messrs Woodhead and Barker, woollen merchants, Dundas Street, Huddersfield. Was a playing member of the Huddersfield Old Boys Football Club and had been included in the County trial teams. Was recommended for a commission by the Huddersfield Town Council under a scheme arranged early in the war, and he was gazetted in November, 1914, and posted to the 7th Battalion East Yorkshire Regiment. Had been in France for six months and returned there for the last time on Whit Saturday, 1916, after a few days leave of absence. Killed in action at Fricourt on 1.7.1916, aged 23 years. Buried FRICOURT NEW MILITARY CEMETERY. Grave location:- Row B, Grave 5.

The East Yorkshire Regiment in the Great War by Everard Wyrall:

7th Battalion, 1.7.1916
At Zero hour – 7.30am – on 1st July, after smoke discharges at many points along the front, and the blowing of mines beneath the enemy's trenches, the assaulting troops advanced with the utmost steadiness to the attack despite the enemy's barrage which was falling very heavily on the line of advance across No Man's Land. The 50th Brigade of the 17th Division had been given the task of assaulting and clearing Fricourt village and wood, thus ensuring contact between the 7th Division on the right and the 21st Division on the left. The dispositions of the four battalions of the Brigade at Zero hour were: 7th Green Howards held trenches from the cemetery to the 'Tambour': this Battalion was to attack the village. The 10th West Yorkshires, detailed to form the defensive flank, were disposed in a line from the 'Tambour' to the apex at Purfleet: the 7th East Yorkshires were in Becordel and 'Bonte Redoubt' in support. The 6th Dorsets were in Brigade Reserve at Meaulte. The East Yorkshires and Dorsets were ready to follow up as the assault was delivered. At 7.30am the assault was delivered. Two companies of the West Yorkshires got across No Man's Land and into the first German line with slight loss and reached their objective, but they had no support, for the two remaining Companies were met by a murderous machine-gun fire from Fricourt and were practically annihilated. The two forward Companies in the German line, left without assistance, were gradually overwhelmed and, being separated into small groups, were practically wiped out, only a few survivors getting back to the old British front line: one small detachment however, managed to effect a junction with troops of the 21st Division. Machine gun and rifle fire prevented a further advance from the British line and the Battalions which had been ordered to follow in rear of the troops detailed for the initial assault were unable to move. 'C' and 'D' Companies of the 7th East Yorkshires were in South Avenue when, at 8.26am the last of the West Yorkshires 'went over.' By 9am 'A' and 'B' Companies from Bonte Redoubt had moved up to Kingston Road and held the front line with one platoon, two Lewis guns and a trench-mortar carrying party. 'D' Company was then in Surrey Street. At 10.06am the 7th Green Howards reported that their front Company had attacked and was in front of Fricourt and a little later 'A' Company of the East Yorkshires was ordered up in support. The Lewis-gun officers reported that it was impossible to mount a gun on the lip of the crater as long as the German machine guns remained active, though he had mounted a gun on the trench parapet. Just after 11am 'B' Company was moved up towards Rundel Avenue and 2nd Lieutenant Thomas with two other ranks was sent out from Purfleet to try and gain touch with the West Yorkshires. About an hour later he was brought back wounded by his servant. No West Yorkshiremen were found in the front German trench. Two other patrols sent out had not returned by 1.15pm, at which hour the 7th East Yorkshires were ordered to attack in support of the West Yorkshires at second Zero which was to be 2.30pm. At 2.33.pm 'C' and 'D' Companies of the East Yorkshires advanced over the parapet towards Red Cottage. They were met at once by a murderous machine-gun and rifle fire and were unable to get on. 'B' Company, which had been detailed to support the attack did not get beyond the front line. Terrible casualities were suffered in this second attempt. The two attacking companies of the East Yorkshires, 'C' and 'D' were practically swept away when ever they set foot in No Man's Land, which was already thick with dead and wounded men. This second attempt also failed and during the night of 1/2nd July the 50th Brigade was relieved and marched back to Heilly and Meaulte to reorganise, though having to provide carrying parties for the 51st Brigade. The 7th East Yorkshires lost on the 1st July 4 Officers killed and 1 Officer wounded:- in other ranks the losses were - killed 29, wounded 72 and missing 17: a total of 5 Officers and 118 other ranks.

East Yorkshire Regiment | Huddersfield and District Roll of Honour | People
This page was last modified on 6 May 2020, at 17:11.