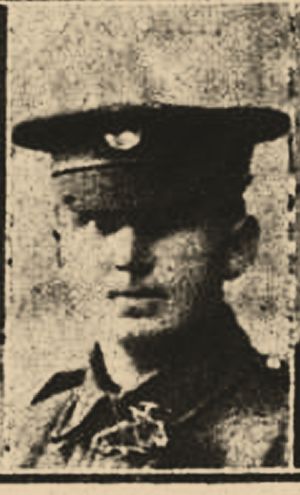 Married Lily Haigh, daughter of Frederick William Haigh, in 1915. The couple had one daughter, Lilian, who died in infancy.

HALSTEAD, FRANK. Private. No 154. 12th Battalion King's Own Yorkshire Light Infantry. Born 'Royal Oak Hotel' 5.3.1886. Eldest son of Emma Halstead, 2 Garden Street, Lockwood. Educated Spring Grove Board School. Prior to enlisting, was employed as a miner at Parkdale Colliery, Clayton West. Was a member of the Young Men's Bible Class at Buxton Road Wesleyan Chapel. Was married in September, 1915. Lived Bradford Road, Huddersfield. Enlisted at the outbreak of the war. Served in Egypt and had been in France for eight months. Wounded at Bertrancourt, 1.7.1916. Died of wounds, 3.7.1916, aged 31 years. Buried BERTRANCOURT MILITARY CEMETERY. Grave location:- Plot 1, Row A, Grave 16.

Huddersfield and District Roll of Honour | King's Own Yorkshire Light Infantry | People
This page was last modified on 17 May 2020, at 12:11.