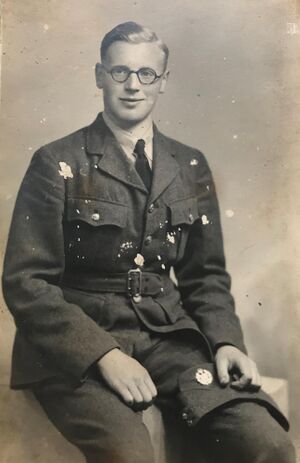 Frank Bottomley was born in Upperthong on 5 January 1889, the youngest of the eight children of Ben Bottomley, a carter, and his wife Elizabeth.

On 8 May 1909, Frank married Rhoda Dawson Moorhouse of Booth House, Holmbridge at Hinchliffe Mill Chapel. In the 1911 census, they are living with their one-year old daughter Alice at 174 Woodhead Road, Holmbridge, Frank’s occupation given as Worsted Piece Dyer. They later had two further children. Before enlisting, he worked at Farrar’s Dyeworks at Honley.

In his spare time, Frank played cricket for Holmbridge and Cartworth Moor and was a member of Hinchliffe Mill Brass Band.

Frank enlisted in 1915 and reached the rank of Corporal in the Royal Field Artillery. He served in Damascus and Mesopotamia and was taken prisoner but no further details of this can be found. He was discharged from the army on 25 February 1919 with Silver War Badge B347501 suffering from ‘sickness’ presumably the malaria from which he died at home a year later on 28 January 1920. His funeral took place at the burial ground of Hinchliffe Mill Wesleyan Cemetery on 31 January 1920.

Huddersfield and District Roll of Honour | People | Royal Field Artillery
This page was last modified on 25 February 2021, at 21:26.