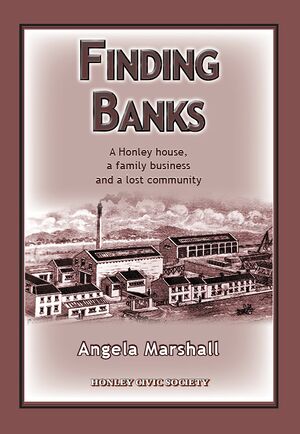 Finding Banks: A Honley house, a family buess and a lost community was written by Angela Marshall and published by Honley Civic Society in 2020.

A new title from Honley Civic Society is Finding Banks, the history of a Honley house, a family business and a lost community. Written by a resident of the area, Angela Marshall, and inspired by the BBC TV programme, A House Through Time, the book takes the history of one house a stage further by revealing the development of the surrounding area of Honley known as Banks.

The family business of Edward Holdroyd and Sons started at Banks around 200 years ago and has played a central role in the building of Honley houses and the burying of Honley people. Its story and the impact on the village is fascinating.

The author discovered a whole community which has now vanished and this is also described with much genealogical research painting a full picture of the area and its residents.

Books, booklets and pamphlets | Books about Honley
This page was last modified on 24 September 2020, at 13:23.