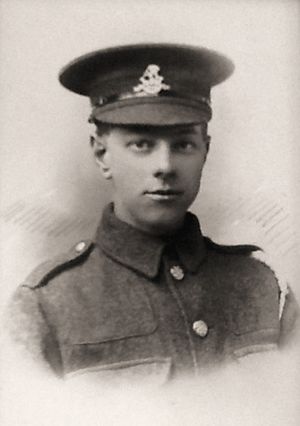 By 1901 they had moved to 72 Acre St not far from the English Card Clothing Company where Ann, then aged 14, worked as a card dresser.

Ernest was a pupil at the Council School in Oakes.

Of those neighbours in employment, the vast majority were in some way connected to the textile industry and included a "Traveller" who could afford a servant, weavers, menders and cloth finishers. And like many of their neighbours, the Croslands were all born in Lindley.

By 1911 the Crosland's had moved to 114 New Hey Road, a house with three rooms. Ann was still working at the card works on Acre Street and Agnes was working as a mender. Ernest was a "Lithographic Artist". He was a member of the Young Man's Bible Class at St. Stephen's.

By the time Ernest enlisted, in December 1915, the family had moved along Acre St, to 12 Savile Road. His occupation was given as "lithographic artist" with a note to the effect that he worked for A Jubb and Sons, St. Johns Road, Huddersfield.

Ernest put his name forward on 12 December, almost the last day he could do so under the "Derby Scheme" whereby enlistment could be deferred. Ernest was in fact not "mobilised" until 24th of the following month and posted into the 3rd Battalion, the training battalion, The Duke of Wellington's Regiment. George Dyson another Lindley man, had attested two days earlier and was called into the 3rd Battalion on the same day.

At 5' 4" with a 32" chest and weighing 100lb, or 7 st, 2 lbs. Ernest was not a big man but his physical development was described as "fair" and it was remarked that he "will develop". He indicated that he was unwilling to be vaccinated.

Ernest was posted to France on 24 May 1916 finally joining 2nd Battalion (a Regular unit) on 6 June. He was posted missing and later presumed dead on 1 July 1916, at Beaumont Hamel, on the first day of the Battle of the Somme, along with almost twenty thousand other British and Empire soldiers. He had been in France for less than thirty-eight days.

While still described as missing his mother wrote to the War Department enquiring if there was any more news probably hoping that he had turned up alive. Soon after this she must have been informed that he was he presumed dead. His personal property was returned 30 March 1917.

Ernest was 24 years old when he died and is buried at the Serre Road cemetery, in the Somme area, along with many other soldiers of the Duke of Wellington's, West Riding Regiment.

On 30 January 1921, his father Charles acknowledged receipt of a sum granted in respect of Ernest's service, which totalled some 203 days. Locally, Ernest is remembered at St. Stephen's church.