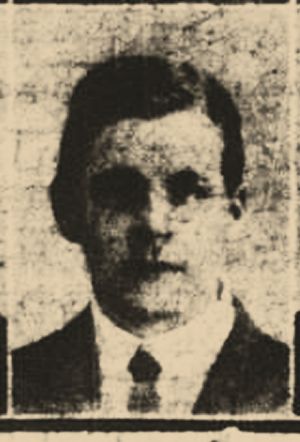 Ernest was born on the 21 April 1885 and baptised on 7 June at the parish church in Brighouse, the second child of William and Mary Ann Clough. In 1891 the family lived in Clifton, above Brighouse and William worked as a "wire drawer". Their first child, Herbert, was aged 10 and Ernest five. Another son William, followed in 1897.

Ernest and probably Herbert too, went to school in Brighouse and Bailiff Bridge.

It may be William's trade that brought the family to Lindley where he could work in the Card Clothing Company on Acre Street. The family lived at 3 Thorncliffe Street in the centre of the village. Ernest became a member of the Young Men's Class at the Zion Chapel Sunday School.

In 1900 Mary Ann Clough died at the age of 33. William purchased plot in the graveyard of the Methodist Church on East Street where, presumably, they worshipped and Mary Ann was buried on 13 July.

By 1901 William was employing a housekeeper, Jane Fearnley who he may previously known in Clifton, to look after him and the boys. With the wages of Herbert who was a joiner, and Ernest who worked as a house painter, coming into the house, William, a wire drawer, could afford someone who could look after his youngest son, also William, who was only four years old. However, we do not know the exact arrangement with Jane: she may have worked for little more than her keep.

In the summer of the following year, William married for a second time: Martha Hannah Aspinal Radcliffe became Mrs Clough and moved in with William and the two boys, Ernest and William. Herbert had probably married by 1911 and moved out.

William still worked at the card clothing factory in 1911 but neither son followed in their father's trade: Ernest was a housepainter and William a tailor's apprentice in a "Wholesale Clothiers".

In the spring of 1916 Ernest married Rachel Stephens, a domestic servant living and working in Mountjoy Road and originally from Morayshire, Scotland.

Ernest joined the Duke of Wellington's Regiment on the 2 March 1917, probably just before or after being conscripted.

The 2/5th Battalion never went to France until January 1917, which was after the introduction of conscription. Ernest must have joined it, after training, as a replacement. He cannot have been in France long when he was wounded in the abdomen and died on 2 December 1917 at No. 49 Casualty Clearing Station.

Ernest lies buried along with over 1200 other men, both Commonwealth and German, in a small village some 10kms NE of Bapaume. He is remembered in St. Stephen's church, on the Zion Chapel Roll of Honour and in St. James Prebyterian Church in Waverley Road, just off New North Road. His brother William also served, in the Royal Engineers, and fortunately survived.

After the war his wife presumably went to live in Kent. Ernest's step-mother, Martha, died in 1929, and his father William, in 1936. Both are buried in the family plot at the East Street Methodist Church.