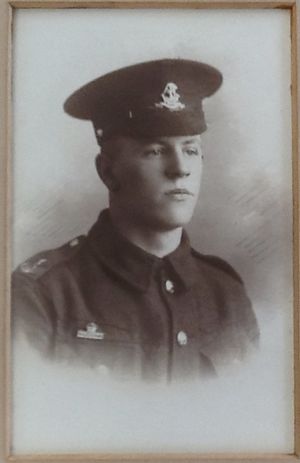 Eric Kelsall was the son of Thomas and Grace Kelsall of 91 Wellington Street, Oakes, Lindley, Huddersfield.

Like only a few others, Eric Kelsall was unusual among the Lindley men: he was born not in Yorkshire but across the Pennines in Nelson. Thomas Kelsall, Eric's father, was in 1901 a "journeyman baker" born in Shropshire and with his Glaswegian wife, Grace, raising his family in Blackpool.

Thomas' skills were such that he could be relatively mobile and sometime around 1903, when Kathleen was born, they had lived in Asbourne in Derbyshire and it was here that Eric first went to school; by 1911 the family were living at 87 Wellington Street and he was described as a "confectioner and cook".[1]

Jack, the oldest Kelsall child was at 16, an "apprentice engineering fitter". Elsie, three years younger, was, like most of the neighbours, a textile worker, a mender. Eric and his younger sister Kathleen were still at school.

In December 1910 Jack Kelsall was a witness at the wedding of Sarah Dyson and Fred Robinson. Sarah's brother, Norman, would marry Jack and Eric's sister, Elsie, in December 1918 just days before he died at Royds Hall Military Hospital.

It was a small house with only three rooms. Nevertheless, they had a lodger, John Lodge a widower from Skelmanthorpe who worked as a weaver. The house must have felt very crowded and one can only assume they took in a lodger to help pay the rent or perhaps it was a short-term favour for a fellow worker.

The details from the Commonwealth War Graves Commission give the family address as number 91 Wellington Street and it possible the houses were renumbered though most of the street had been built by then and it is more likely they moved to a slightly bigger house.

Eric was the youngest of those from Lindley who died in the Great War and was only 16 years and four months old when he enlisted on 13 August and must have lied about his age to enlist. This was not uncommon and many soldiers were under-age. Many of the Lindley recruits were about 5' 5" and possibly Eric was tall for his age. What drove Eric to join up could have been the patriotism that was in those days instilled at school, or perhaps the simple desire for a bit more excitement than he found in his work as a beamer. By the time he enlisted Eric was working at British Dyes — the government-sponsored company that took over Read Holliday on Leeds Road.

Like many Lindley men, Eric served in the 1/5th Duke of Wellington's. This was the local battalion raised initially in Halifax. Huddersfield men who enlisted very early in the war and who were prepared to serve abroad, joined the 1/5th.

The Battalion sailed for France on 15th April. Eric joined the battalion in April 1916 — having spent some time at the Clipstone Camp in Mansfield. He was certainly under eighteen years of age and should not have been sent to the front. He died as a result of a shell burst on 28 July 1916 around Thiepval, early in the Battle of the Somme, and is buried at the Connaught Cemetery at Thiepval. The O/C of D Company said he was "cheerful and willing" and would be missed by his comrades.

Eric is remembered in St. Stephen's church like his brother-in-law, Norman Dyson.