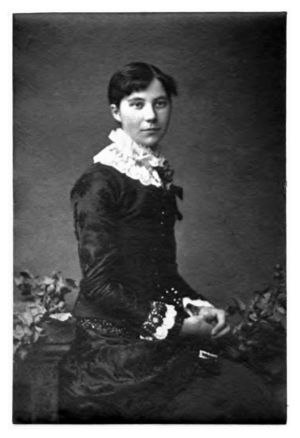 Emma Battye was a dressmaker whose poetry was published posthumously.

She was born in the township of Cartworth, the daughter of cloth miller George Battye and his wife Elizabeth.

By the early 1870s, the family had moved to Huddersfield and were living on Bell Street (off Newsome Road) at the time of the 1881 Census when Emma was working as a dressmaker.

She died in the summer of 1884 from tuberculosis.

Her poetry was published posthumously by her friends.

A little book, to which a somewhat melancholy interest attaches, is the "Poems" of Miss Emma Battye, of Lockwood. Miss Battye fell a victim to that scourge of some districts, consumption, but the prospect of having her works published in book form became, I believe, one of her consolations as the disease gained greater and still greater strength. She did not live, however, to see the little book published, but after her death it was brought out by subscription as a memorial volume. It was published at the office of the Huddersfield Examiner, in which paper many of the poems had previously appeared. It is revealing no secret to say that the gentleman who displayed the greatest interest in securing the publication of the poems in collected form was Mr. Edward Cockshaw.