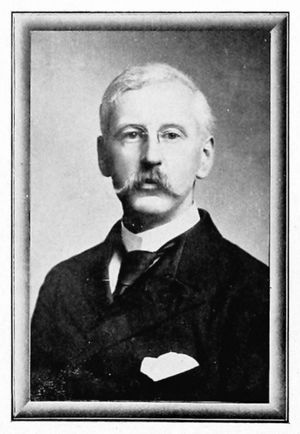 Sir Edward Hildred Carlile was a businessman and Conservative Party politician, and the nephew of James William Carlile.

In business, he was a partner in the of Jonas Brook & Bros., Meltham Mills. Following the firm's merger with J. & P. Coats Ltd., he served as a director of the company.

He was a Captain in the 2nd West Yorkshire Yeomanry and subsequently commanded the 2nd West Riding Regiment (later the Duke of Wellington's Regiment) of which he was the Honorary Colonel from 1906 to 1939.

He was born in July 1852 at Richmond Hill at Brixton, Surrey, the son of merchant Edward Carlile and his wife Maria Louisa (née Wilson).

He married Isabella Hanbury on 22 August 1876 in London. The couple initially settled at Thickhollins Hall, near Meltham, where they had five children:

At the time of the 1881 Census they were staying with Isabella's widowed mother Elizabeth Hanbury at The Firs, Wellington, Somerset. Edward Hildred's occupation was recorded as "cotton thread manufacturer".

He was initiated into the St. George's and Cornerstone Lodge (No. 5) of Freemasons in London on 11 January 1897. Later that year he established a fund to add a new wing to the Huddersfield Infirmary to which he donated £15,000.

He stood as a Conservative in Huddersfield at the 1900 general election, but lost to the Liberal candidate Sir James Thomas Woodhouse.

By 1906, they family had moved to Ponsbourne Park, Hertfordshire, which was the estate of his uncle James W. Carlile.

He was elected as the Member of Parliament for St. Albans at the 1906 general election and remained in the position until retiring due to ill-health in November 1919.

During the First World War he worked for the Red Cross and was awarded the C.B.E. Sadly, his only son, Edward H.H. Carlile was killed in action in France on 22 March 1918.

In 1922 he was appointed the High Sheriff of Hertfordshire.

Carlile, Edward Hildred, the second son of Carlile, Edward, of Richmond, was born on 10 July, 1852, and was educated privately in England and abroad. He adopted a commercial career, and became a partner in the firm of Jonas Brook & Brothers, Meltham Mills, Huddersfield. On this firm becoming merged in J. & P. Coats, Limited, he became a Director of that Company, but has since retired. In politics he is a Conservative, and he is a member of the Carlton and Junior Carlton Clubs. In 1900 he contested Huddersfield, but was defeated by 7896 votes to 6831. In 1906 he contested the St. Albans Division of Hertfordshire, and was successful by 5856 votes to 5304 ; majority 552. During the sessions of 1906-7-8 he was one of the most regular supporters of the Opposition in the House of Commons. He took much interest in the Yeomanry and Volunteers, in which his record was as follows:—2nd West Yorks Yeomanry Cavalry (afterwards merged in the Yorkshire Dragoons), Sub-Lieutenant, 15 April, 1874 ; Lieutenant, 10 July, 1885 ; Captain, 6 July, 1889. 2nd Volunteer Battalion West Riding Regiment, Lieut.-Colonel Commanding, 1898 to 1904 ; Hon. Colonel of the Battalion, 23 June, 1906.

He takes much interest in religious and philanthropic societies, and is Vice-President of the Church Army. He was formerly a member of the Huddersfield School Board. He is a J.P. for Herts, the West Riding of Yorkshire, and for the Borough of Huddersfield.

Mrs. Hildred Carlile was born on 27 May, 1855. During the thirty years that she and her family lived in Yorkshire, she took much interest in the Young Women’s Christian Association, and had a large class in connexion with that organisation. Later she became interested in the Mothers’ Union She is a Grand Dame of the Primrose League, and identifies herself with her husband’s political work in various ways. Her chief recreation is gardening. She is a member of the Ladies' Imperial Club. There have been five children of the marriage, all of whom survive ; see Carlile, Edward Hildred Hanbury, Janet Mary Muriel, and Eleanor Cicely ; Pelly, Dora Isobel, and Brooke, Beatrice Gundreda. Mr. and Mrs. Hildred Carlile have resided since 1906, at Ponsbourne Park, near Hertford, a property acquired by Mr. Hildred Carlile from his uncle. This estate of 760 acres (now 570) was purchased by Mr. J. W. Carlile in 1875 from the Wynn Ellis family, and it was there that a portion of the Wynn Ellis collection of pictures, now in the National Gallery, was previously hung. The history of the estate is related in Mr. J. W. Carlile’s Archaeological Studies on the two Manors of Ponsbourne and Newgate Street (1908). Mr. Hildred Carlile’s armorial bearings are as follows :— Or ; a cross flory gules, on a chief, engrailed, of the second a saltire of the first ; Mantling, gules, doubled or. Crest : upon a wreath of his liveries, two dragons’ heads, adorsee, vert. Motto : “Humilitate.”

Justices of the Peace | People | Politicians
This page was last modified on 9 February 2018 and has been edited by Dave Pattern.