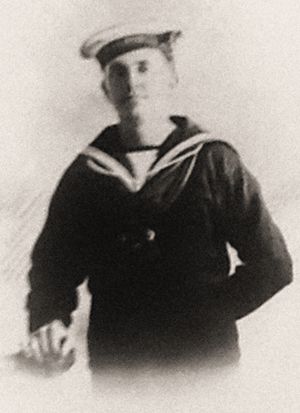 In 1891 Tom and Mary Waddington lived on New Hey Road with their three children, Anne, aged 7, Florence, 4, and Edgar. Florence was baptised at St. Stephen's church in October 1886 when they gave their address as Oakes. Edgar was born on 20 April 1890 and baptised also at the parish church, 15 May.

Tom, who was 28 and worked as a woollen scourer, was born in Longwood, his wife, also 28, in Golcar. The children had all been born in Lindley so we can be certain the Waddingtons had lived in the area at least since 1884.

Edgar, and probably the other children too, attended Oakes Board School. At the end of his junior years, Edgar suffered "serious illness" and absent from school for four months. This meant that he was significantly behind other pupils when he finally entered the Senior Department in April 1899 and was temporarily kept in a lower Standard until he caught up.

Ten years later they gave their address as 69 New Hey Road, though it was probably the same house in 1891. By then, however, they had Mary's widowed mother, Nancy Woodhead, aged 64, living with them. This was not uncommon: there was very little housing set aside for either the widowed or the retired and with no pensions, the elderly relied on their children or went "on the parish" for out relief, or perhaps ended up in the workhouse.

Tom’s occupation in 1901 and in 1911 was given as "Woollen Cloth Fuller" and this may, in effect, be the same as the "wool scourer" given in 1891. His eldest daughter Annie was also working in the cloth industry as a "worsted knotter".

By 1911 all the children but Edgar had married and left home: Florence in 1906 married Luther Wadsworth, a railway engine driver and Annie married Harry Hoyle an iron turner, in early 1908, and moved to Almondbury. By 1910, Edgar was an uncle as Florence had had a daughter, Evelyn. How often he saw her we cannot be sure since they lived in Sheepridge. However, people did tend to make the effort to visit relatives on Sunday’s, for example, either by tram or walking if necessary.

They were living at that time at 254 New Hey Road, which had six rooms, which as there were only three of them[1] was very spacious by the standards of the time. We also learn from their 1911 census form that Tom and Mary had borne four children but one had died young.

Sometime before the War, Edgar served two years in the Army Service Corps, attached to the Lancashire Fusiliers. It seems likely that this was when he was aged 18-20, that is, in the years immediately before the 1911 census.

Back in Lindley and working at Martin's Wellington Mill on Plover Road, Edgar married Ethel Boothroyd in September 1913 at the Zion Chapel on Lidget Street, and it was probably then that he moved up to the centre of the village to live at 22 Temple Street.[2] A son, Jack, was born in the early summer of 1914. It may be then that he joined the Bible Class at St. Stephen's.

Edgar enlisted in the Navy on 14 August 1916, and this may mean he enlisted before being conscripted and definitely chose not to join the army of which he had experience. His Navy records describe him as 5' 4¼" tall with brown hair and blue eyes and a "fresh" complexion and he began his service at HMS Vivid, which was the shore station at Devonport and stayed there until the 7 November.

From Vivid he moved on to HMS President III, an "accounting base" for the Royal Naval Volunteer Reserve into which he was formally enrolled on 1 February 1917 specifically for service on a Defensively Armed Merchant Ship. His Service Number became PZ 3634, which may indicate that he went through Crystal Palace, which became an R.N.V.R. training depot in May 1916.

He was sailing on a cargo ship the SS Wathfield, which was sailing from Malta with a cargo of magnesite, which presumably was essential for the war effort. Navy personnel were on merchant ships to man guns that had been help protect them.

The ship was torpedoed by the German submarine, U-39, 15 miles off the coast of Algeria on 21 February 1917 and sank with the loss of 18 lives, among them Edgar, who was 26 years old and had been married under four years.

As he was lost at sea, Edgar has no grave but is remembered in St. Stephen's and at the Plymouth Naval Memorial to the Missing and on the Merchant Navy Memorial on Tower Hill, London.

By this time Tom and Mary were living at 7 Weatherhill Road.

WADDINGTON, EDGAR. Ordinary Seaman. No Z/3634. Royal Naval Volunteer Reserve. SS Wathfield. Born New Hey Road, Oakes, Huddersfield, 20.4.1890. Son of Mr and Mrs Tom Waddington, 7 Weatherhill Road, Lindley, Huddersfield. Educated Oakes Board School. Employed in the scouring and milling department of Messrs Martin, Sons and Company Limited, Oakes, Huddersfield. Attended St. Stephen's Parish Church, Lindley. Married, with one child. Before the war was in the Army Service Corps, attached to the West Lancashire Regiment, for about two years. Enlisted in the Naval service on 14.8.1916. Reported missing, presumed killed, when the SS Wathfield was struck by two torpedoes from a submarine in the Mediterrean on 21.2.1917. He was 26 years of age. Has no known grave. Commemorated PLYMOUTH NAVAL MEMORIAL TO THE MISSING.