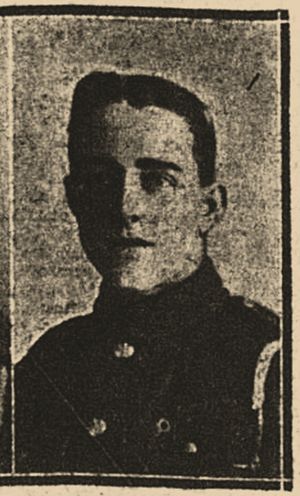 Edgar Cliffe was born in Longwood, in the parish of St. Stephen's, Lindley, in 1892. His father was Alfred Josephus Cliffe, a joiner, and his mother was Lavinia Sykes, both originally from Linthwaite The couple had married in 1884 and Edgar was their second child: a daughter, Lucy Ann had been born in 1887.[1]

Alfred, Lavinia and Lucy lived on Cliffe End Road in 1891 and it was probably there that Edgar was born. At that time Alfred worked as a worsted weaver.

By 1901 the family, were living at 20 Longwood Road and Alfred was now working as a joiner. Lucy, aged 14, was employed as a bookbinder.

Ten years later the Cliffes till lived on Longwood Road but had moved to number 122, a house with five rooms and known as Fern Cottage. Another child, Laura, was born in 1902 and Alfred's widowed father Joah, lived with them. Edgar was by 1911, nineteen-years-old and worked, like his father, as a joiner, at Hollingworths at Moldgreen.

After the outbreak of war and the conversion of Royds Hall into a War Hospital, Edgar was involved in the joinery required in erecting the huts that constituted the hospital wards.

On 1 October 1915 Edgar enlisted in the army. At his medical conducted in Huddersfield on that day he was described as 5' 5¾" tall, weigh 129 lbs and have 33½" chest. He was said to be "Rather Flat footed" and have "Hammer Toe both feet".

Edgar enlisted not in the local Territorial Force but in the Army Service Corps, signing a form that accepted service for "the duration of the war ... with a view to being trained as a Motor Transport Driver." His pay would be 1/2d a day rising to 2/4 when qualified, exclusive of any separation allowance that regulations may specify.

Edgar was sent to a number of ASC establishments first at Osterley Park and back at home for Christmas having gained his "certificate of efficiency for motor driving" on 1 December. He was finally posted to the 610th Mechanical Transport Company based at Bath, where he was billeted at 57 Locksbrook Road, the home of Beatrice Perkins.

After being seen by a doctor complaining of sleeplessness, Edgar went on sick leave and three days later, on 24 January his landlady found he had taken his own life.

Mrs. Perkins described his "cheerful and entertaining" character. The doctor said he noticed a slight mental strain which was "not pronounced" but an "early symptom of melancholia". He was thinking too much of his own health and "was either in or getting into an unhealthy state".

Arrangements had been made to give Edgar a military funeral in Bath but his parents decided he should be buried in Huddersfield. Four wreaths from the regiment and groups of men accompanied the coffin back to Yorkshire and Edgar was interred at the Salendine Nook Baptist Chapel graveyard.

In addition to his grave at Salendine Nook, Edgar is remembered on the memorial at the Shared Church at Paddock, where he had been a member of the choir.

CLIFFE, EDGAR. Private. No M2/129874. 610 Motor Transport Coy, Army Service Corps. Born Longwood. Son of Mr and Mrs Alfred J. Cliffe, 122 Longwood Road, Huddersfield. A member of the choir at Paddock Wesleyan Church. Employed as a joiner by Messrs Hollingworths of Moldgreen. Prior to his enlistment in October, 1915, was engaged in the erection of the Royds Hall Military Hospital. Died very suddenly at Bath of a haemorrhage, 24.1.1916. aged 24. Buried SALENDINE NOOK BAPTIST CHAPEL YARD. Grave location:- in South-East part (298E).