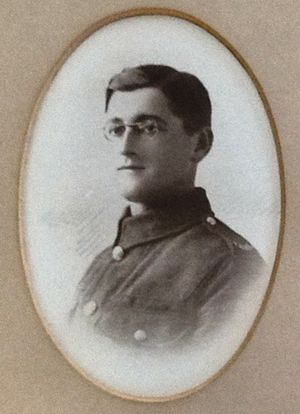 Edgar Bramley Hirst was the only son of Arthur Edward and Frances M. Hirst of 2 Oakes Road, Lindley, Huddersfield.

Edgar Hirst was born in Linthwaite in 1893 and the middle name is probably his mother's maiden name. His father was a woollen warehouseman who came originally from Meltham. They were still in Linthwaite in 1901, where Edgar attended the Church School. Later, perhaps after moving to Lindley and in connection with his work, Edgar attended the Huddersfield Technical College.

The family had three children and all survived into adulthood.

By 1911 the Hirsts were living in a four-room New Hey Road in Oakes. With five of them in total, it was certainly a bit of a squeeze but no worse many of the people of Lindley at the beginning of the 20th Century.

Edgar and his sister Doris, three years his junior, were "woollen warpers". The youngest, Lilian, was only four and may have not yet started school.

On 11th December 1915 when he attested for the army, under the Derby Scheme for delayed "call-up", Edgar gave his occupation as a "twist frame overlooker" and still at the same address as four years earlier. The witness to his signing up was J. Hubert K. Smith "Manufacturer, Plover Mills": his employer had encouraged him or was at least keen he should enlist.

Edgar was not called for service until 17 March 1916. His medical at Halifax tells us he was 5' 2" tall — which was slightly below the minimum height for an infantryman — with a 36" chest, that expanded over a range of four inches, and that he had been vaccinated in infancy. He wore spectacles.

He was sent into "L" Training Battery of the Royal Horse Artillery and also spent some time in the Yorkshire Regiment, perhaps for initial training. He was certainly in the R.H.A. when, three months later on 21 June 1917, he embarked at Folkestone for Boulogne. He was in the "Field" a week later as a Driver in a signals company.

On 18 September, Edgar was compulsorily transferred to the Royal Engineers probably when the R.H.A. signals became the responsibility of the R.E., and was a now a sapper in the Fifth Army Signals Company. He was given a new number and a new rate of pay as a skilled man, 1/4d per day, which was presumably more than he was paid in the R.H.A. However, he did not have long to enjoy his higher pay — Edgar was killed in action on the 17 November 1917 at the age of 25, five months after arriving at the front.

Edgar Hirst is buried at the Bard Cottage cemetery in the Ypres Salient and was initially for the West Riding and Welsh Divisions that were in the area from June 1915 until October 1918. Edgar is therefore buried with other men from West Yorkshire.

Locally, Edgar is remembered at St. Stephen's church which he must have attended as he was a member of the Young Men's Bible Class. By this time, the family had moved to 2 Oakes Road.