Dorothy Langley was a singer and actress.

Her older sister Mildred was a gifted pianist who first performed at Huddersfield Town Hall aged 12. In subsequent performancess, Dorothy sometimes accompanied her and was said to have a strong contralto voice.

By 1911, Hilda Martha Garner (aged 7) and her father were lodging with the Langleys on Northgate, Almondbury. Hilda, who was described as a gifted young mimic and comic, also began performing with the sisters. In late June 1914, she performed at the King's Hall, Dover, accompanied by Dorothy and Hilda (who was introduced as being a younger sister).[1] Together, they billed themselves as "The Three Rubenstein Vladia" and played further dates in July.[2]

In December 1914, Mildred organised a benefit concert at Huddersfield Town Hall which included a 400-strong chorus of children and other young performers. Both Dorothy Dorothy and Hilda sang at the concert.[3]

Dorothy, Mildred and Hilda — the latter now nicknamed "Baby Langley" as she was the youngest of the three — were advertised in a notice placed in The Stage (28/Jan/1915) as the Langley Sisters Trio:

THREE OF THE MOST WONDERFUL SISTERS IN VAUDEVILLE.

MILDRED LANGLEY,
Age 14 years,
The Beethoven of to-day, both in likeness and gonitis, whose works have bean accepted by HER MAJESTY THE QUEEN, also by HER MAJESTY QUEEN ALEXANDRA.

BEATRICE LANGLEY,
Age 15 years,
The girl with the marvellous voice, who will sing her Sister Mildred’s works, AND

BABY LANGLEY,
Age 11 years,
Who will give her impressions of great Artists, and CONDUCT THE BAND to her Sister Mildred’s compositions.

Hilda's talent as a comic and mimic resulted in her starring in at least six short comic films as "Baby Langley" for Bamforth & Co. Ltd. between April and August 1915: 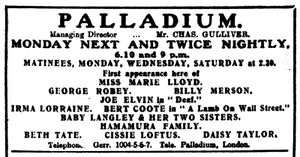 In early May 1915, the Langley Sisters Trio performed at the London Palladium, where Hilda conducted the orchestra. Their popularity led to run being extended through to mid-June.

Infant prodigies on the stage are fewer than they used to be, but occasionally we come across a new one. At the Palladium, Baby Langley, a very clever little mimic, and her two sisters, also quite young — one is an accomplished composer, and plays beautifully, and the other has a mellow contralto voice of surprising richness — are a welcome addition to the programme. Their "turn" is all too short.
— Westminster Gazette (04/May/1915)

Following on from their success at the Palladium, the sisters toured as "The Three Prodigies" until December 1918 with dates including:

Dorothy continued as a stage actress until at least the 1940s, often taking the role of principal boy in pantomime.[4]. One of her more notable roles was as Junetta in the original West End production of Stanley Lupino's "Love Lies" in 1929. Sadly, she didn't reprise the role in the 1932 film version of the play.

The last performance found during research was in "A Waltz Dream" at the Preston Royal Hippodrome in June 1946. According the the IMDB site, she may have had an uncredited role as "Lizzie" in the 1949 film The Last Days of Dolwyn, which starred Richard Burton and Edith Evans.