Dorothea Schofield was one of the three victims of the Holmfirth Flood of 1944.

Dorothea Hunter was born on 27 November 1909 at Manchester, the daughter of railway worker Basham Harvey Wesley Hunter and his wife Grace Harriet (née Baildon), and was baptised on 30 January 1910 at Ancoats, Manchester.

At the time of the 1939 Register, the family were living on Towngate, Holmfirth.

By 1944, she was employed as a part-time clerk by motorbus proprietors Baddeley Brothers of Holmfirth. 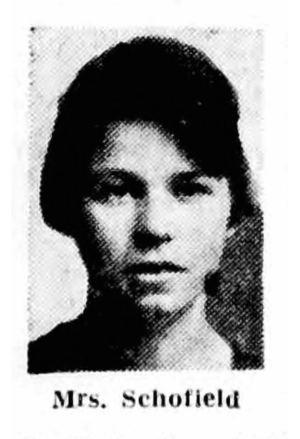 On 29 May 1944, a heavy cloudburst led to flash flooding in Holmfirth.

Together with bus conductor Lewis Hirst, Dorothea was at the firm's garage on Hollowgate when the pair found themselves cut off by rapidly rising floodwaters and "climbed on to a wall where they were marooned". To the horror of onlookers — including Lewis' mother — the wall collapsed, "casting the couple into the swirling currents". Lewis managed to "scramble on to a bale of bobbins" and was rescued, but Dorothea drowned.[1][2]

In February 1945, her daughter Marjorie received £500 from the Holmfirth Flood Relief Fund. The money was placed into a bank account for her until she reached the age of 23.[3]

Her father committed suicide by drowning himself in Scout Dyke Reservoir near Penistone. He was last seen alive on 7 December 1954 and his body was recovered on 30 January 1955.

Her husband, Willie Schofield, is believed to have died aged 71 in 1983 at Huddersfield.