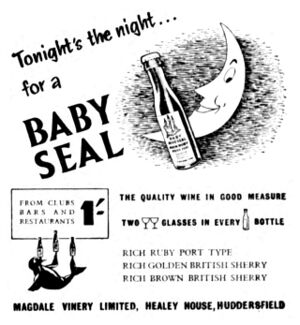 Crosland Mills (also known locally as Crosland Factory) is a former woollen mill situated on the South Crosland side of Hall Dike (which later becomes Mag Brook). The mill was supplied by water from a mill race, which diverted part of the flow of water beyond Healey House.

By 1906, the mill was marked on the Ordnance Survey map as "disused", but had reopened as a worsted mill by the 1930s. Photographs from this period show the structure was four storeys tall. By the mid-1960s, the mill had been largely replaced by the current two-storey factory.

By 1953, the former mill was home to sherry producer Magdale Vinery Limited.[1] The company was later acquired by Allied Breweries.[2]

Separate depot and industrial warehouse buildings were built opposite the former mill, later becoming known as Crosland Road Industrial Estate. These buildings were demolished in 2015 as part of an approved plan to construct a housing estate of 27 properties on the land.[3][4]