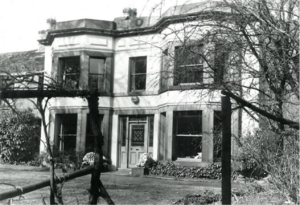 According to a margin note in the 1841 Census return, the property was also known as Beggars Style[1] but was renamed Croft House by woollen manufacturer George Haigh. Beggars Style is references in an auction of 1778:[2]

A Messuage of Tenement, Stable, and Cottage, with the Appartenances, situate at or near Edgerton aforesaid, and now in the Occupation of John Owen and his Undertenant. And also Two Closes of Ground, with their Appurtenances, lying near or adjoining the said Messuage, called the Nook and the Beggars-Style, be Estimation Eight Acres and an Half, and now in the several Possessions of the said John Marshall and John Owen, together with so much of the said North Wood as adjoins upon the Beggars-Style. The above Estate is supposed to have a valuable Bed of Coal therein, and is very fit for a Merchant of Capital Tradesman.

Former residence of David Sykes, who was the Mayor of Huddersfield from 1874 to 1875.