In January 1893, in response to a local outbreak of smallpox, the Linthwaite Local Board leased an unoccupied farmhouse at Moor Top, Meltham Edge, which they converted into an isolation hospital at a cost of just over £200. Within a few months, the local boards of Golcar, Slaithwaite and Marsden had agreed to jointly fund the hospital and to admit smallpox patients from other local townships if the expenses were paid for.

Discussions regarding the provision of a purpose-built joint infectious diseases and isolation hospital for the Colne and Holme valleys had been ongoing since at least 1896, but the issues of where it should be located and who should pay for it proved contentious. These continued to be regular agenda items at the meetings of the dozen or so districts involved for several years.[1]

In particular, the Meltham District Council had already gone to the expense of purchasing land to build their own hospital, so did not wish to be forced into the extra expense of paying for a separate shared isolation hospital.[2] When Meltham tried to withdraw, the South Crosland Urban District Council formally objected.[3]

After various appeals by the local districts were rejected by the Local Government Board, the West Riding County Council pushed ahead with the purchase of land at Spring Head in 1901, opposite to the Travellers' Rest, and then the erection of the hospital the following year after securing a loan of £23,744.

The hospital was designed by Huddersfield architect Joseph Berry and the cornerstone was laid on Saturday 2 August 1902 by Committee Chairman and local Justice of the Peace, Thomas Mallinson. Newspaper reports of the ceremony stated that the site occupied 19 acres, with 7 acres covered by the buildings. The hospital would comprise seven blocks, capable of accommodating a total of 50 patients.[4] Smallpox patients would continue to be treated at the nearby hospital at Moor Top.

In 1905, Miss Edith Sime was appointed as the Charge Nurse. She "trained at the Royal Infirmary, Glasgow, and [...] had experience in infectious nursing at the Ham Green Fever Hospital, Bristol."[6] In 1908, Miss T.M.R. Vaughan was appointed the Sister of the hospital, having previously held the position of Staff Nurse at the Plaistow Hospital.[7]

In November 1905, engineer George Holroyd (aged 41) committed suicide by cutting his throat and jumping into a reservoir. He had worked at the hospital but had rowed with the matron — on one occasion they "had a heated argument over the measuring of a corpse" and later Holroyd "threw a pint of carbolic acid over her, badly burning her about the face and neck". His suicide note read, "I have been driven to do it by that woman." The inquest jury returned a verdict of of "suicide whilst of unsound mind."[8][9]

The winter of 1908-09 proved traumatic for the staff and patients as they were plagued at night by someone throwing stones at windows, rattling locked doors, and banging on the outside walls. Despite sub-zero temperatures, the disturbances would carry on through the evening and well into the early hours, often several nights in a row. A supernatural explanation was eventually dismissed as the perpetrator left footprints in the snow. On several occasions, a "short thick-set man, wearing a cap" was seen creeping around the hospital grounds. Once, he was chased but evaded capture and disappeared into the fog.

Local police mounted a watch on the hospital, but failed to apprehend the man. A detective from Holmfirth was also unsuccessful. Female staff were so frightened by the the noises that they refused to work the night shifts alone. Suspicion briefly fell on the only two male members of hospital staff, but the events continued even when they were known to be elsewhere with the hospital's ambulance. The man's knowledge of the hospital grounds led some to believe that he was a disgruntled former patient. However, by April 1909, the lighter nights led to a cessation of the disturbances and the miscreant was never caught.[10]

According to a newspaper report, in July 1909 a Committee member took exception to the Matron claiming expenses for purchasing a dozen tennis balls for use by the nurses. The Chairman however felt it important that staff were able to go outside and exercise "to keep them healthy after being in the wards."[11]

An advertisement for a ward sister in 1910 required three years of general training and experience of treating patients with fevers. The salary was £35 and included uniforms.[12] The following year, the hospital advertised for a new laundress, "accustomed to small laundry", with a salary of £25.[13]

In July 1914, Fred Hinchcliffe wrote to the New Mill Urban District Council to express "his thanks for the efficient treatment his wife had received whilst a patient at the Colne and Holme Joint Hospital."[14]

In May 1915, it was reported that there were 27 patients in the hospital, with four cases of scarlet fever from the Holmfirth distinct.[15]

19-year-old Ada Cheetham, a ward maid at the hospital, collapsed on the afternoon of Sunday 17 October 1915. She was found on a footpath and taken to the house of Herbert Lydall but, before Dr. Gellatley could arrive, she had died.[16]

In October 1933, it was reported that the hospital had 46 patients with scarlet fever, "the largest number since 1929", with 6 other patients suffering from typhoid fever.[17]

The post of Matron was advertised in November 1940 at a salary of "£170 per annum, increasing £10 a year to £200, together with uniform allowance and war bonus of 6%." The notice also stated that the hospital then had a capacity of 75 beds.[20]

The hospital was closed temporarily in mid-1946 due to staffing shortages. Alternative arrangements were made to treat patients in Huddersfield.[21] A number of job advertisements appeared in the local press in order to try and recruit new staff. By August 1946, the hospital was appealing to "residents in the district with nursing experience to offer their services as paid volunteers."[22] The hospital was able to partially reopen by late September, in order to accept a number of scarlet fever cases.[23]

The position of Matron was advertised in February 1948: "Candidates must be State Registered Nurses and Registered Fever Nurses, not over 45 years of age, and should have a wide experience in fever nursing."[24] 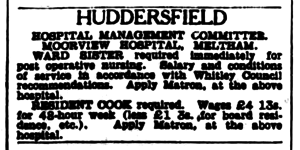 The death of Dr. Robert Gellatly, of Dudd House, Wessenden Head Road, Meltham, was reported in July 1951. He had served as a medical officer at the hospital.[25]

The Colne and Holme Joint Isolation Hospital later became an convalescent annexe to the Huddersfield Royal Infirmary before eventually closing in the late 1960s.[26]

The hospital buildings were later demolished, with the exception of the lodge house, and the housing estate at Moor View now occupies the site.

A local government report published in 1912 contained the following:[27]

The site is on Meltham Moor in Meltham Urban District, in an elevated and exposed position between 775 and 850 feet above sea level. The land purchased was 19 acres, but only the lower part of this, about five acres, forms the hospital enclosure. The upper part of the land is crossed by the conduit of the Huddersfield Corporation Water Works, but this is outside of the enclosure and well away from it on a higher level, a substantial stone wall intervening. The hospital is drained into the Meltham sewers, and is supplied with water from a spring on the site; this water, however, has the disadvantage of being ferruginous, and iron-moulding linen.

The hospital buildings comprise three pavilions, one isolation block, administration block, laundry block, and porter's lodge. Of the pavilions, one contains an 8-bed and a 6-bed ward ; another, in addition, two single-bed wards, and the third two 6-bed and two single-bed wards. Each of them also has a convalescent room on the first floor in the centre of the block — see plan.

The isolation block has two wings facing in opposite directions, with in each wing a 2-bed and a 1-bed ward.

The administration block contained originally 15 bedrooms, but this accommodation having proved insufficient an extension adding six bedrooms was made out of the unexpended balance.

The hospital, which was designed by Mr. Berry, architect, of Huddersfield, is a very complete and well-equipped one, though the cost per bed is not low. It was opened in October, 1904. I visited the hospital in June, 1909, with Dr. Kaye, county medical officer, and Dr. Webster, medical superintendent.

I found that somewhat more beds were put in the wards than they were designed for, thus an 8-bed ward contained in addition four cots. The floors of the wards, which were of narrow maple boards, had shrunk, forming wide crevices between them. The warming of wards by the Musgrave stoves originally provided had been found insufficient owing to the bleakness of the site, and those with descending flues were found liable to smoke. In consequence a system of heating by radiators, with hot water from a central underground boiler, had been constructed out of the unexpended balance of loan, and this was said to have effected a great economy in fuel.

The single-bed wards attached to the pavilions, and the convalescent rooms on an upper floor were said to have been found very useful on occasion. The hospital had been much used, especially for scarlet fever, but there had been few "return cases," and no cases of cross-infection.

A 1922 report into isolation hospitals recorded:[28]

This hospital, designed by Mr Berry, architect, of Huddersfield, is very complete and well-equipped. The cost of erection was £23,310 for 50 bed-spaces of 2000 c ft., or £466 per bed, or including site £484. The site is cold and bleak, and the warming of the wards having been found insufficient, a system of heating by hot-water pipes from a central underground boiler had to be constructed. Sewers were available, and water is obtained from a spring. There is an electric light plant and a small destructor furnace. [...] [The layout] is based on the official plan C, but with the addition of verandahs approached from the wards by French windows, of single-bed wards entered from lobbies, and a convalescent room on the first floor over the centre of the block. The arrangement of the bathrooms in the annexes is ingenious. The single-bed wards and the convalescent rooms have been found very useful upon occasion.

Buildings | Demolished buildings | Hospitals, infirmaries and convalescent homes
This page was last modified on 31 December 2020, at 00:29.