At around 5 o'clock on the morning of 14 February 1818, a fire was accidentally started at Thomas Atkinson's cotton mill at Colne Bridge by a young boy named James Thornton. After being sent down to the carding room, Thornton's candle had ignited nearby flammable material and the fire quickly spread.

According to contemporary newspaper reports, 26 people — mostly girls and young women — had been working through the night. Thornton ran upstairs to alert the workers and he, along with a few of them, managed to escape. It was reported that a girl who was hurrying behind the boy perished when the floor collapsed around her feet and she fell into the inferno below.

The large volume of cotton in the mill meant there was little hope of rescuing the workers who remained trapped on the upper floor. As attempts were made to gain entrance to the far end of the mill, away from the source of the fire, the roof and floors of the mill collapsed.

In total, seventeen girls and young women (aged between 9 and 18) perished in the inferno, including sisters Mary and Elizabeth Moody, although their younger sister Sarah survived. The reported list of survivors were:[1]

It was reported that the bodies were in "so mutilated a state as to render it impossible for their nearest friends to recognize them". As the parents were unable to identify their children, and reportedly only fifteen bodies were actually recovered, they were buried together in a communal grave on 16 February 1818 at St. John the Baptist, Kirkheaton.[7] 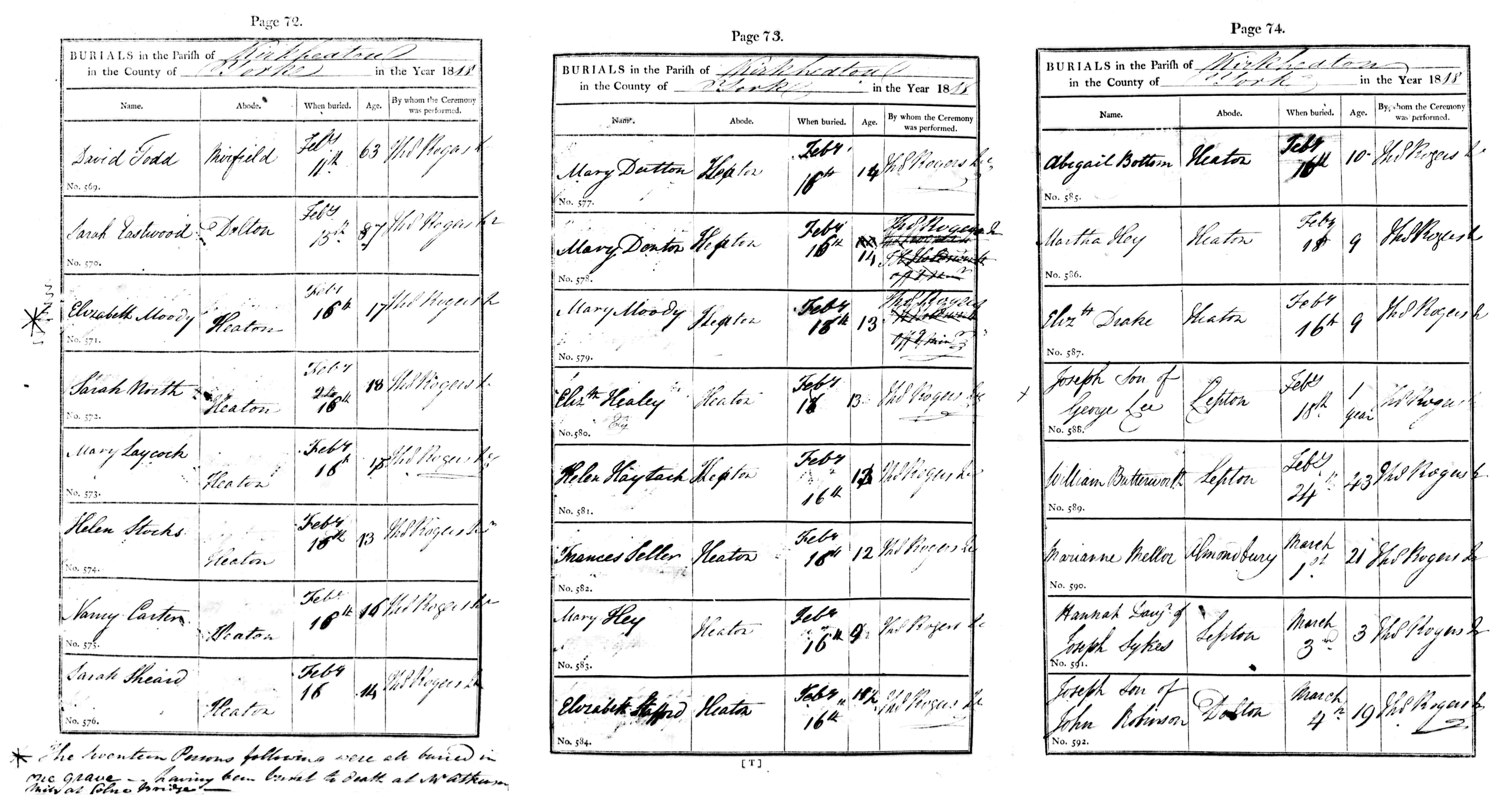 Donations were collected for a permanent memorial to commemorate those who died and it was erected three years after the tragedy in 1821.

Inscribed on two of the opposite sides of the memorial are:

To Commemorate
the dreadful fate of
Seventeen Children
who fell
Unhappy Victims to a raging Fire
at
Mr. Atkinson's Factory
Colne Bridge. Feb. 14th 1818.
This Monument
was erected by
Voluntary Contribution
MDCCCXXI.

Near This Place
Lie what remained of the Bodies
of Seventeen Children
A striking and awful instance
of the Uncertainty of Life
and the
Vanity of human Attainments.

On a third side are inscribed the names of those who perished, along with their ages:

On the final side is the following poem:

Stranger! If e'er
A mother's tender fears,
Have watched thy steps
From dawn to riper years.
If e'er soft pity for
Another's woe
Has swelled thy breast
And caused a tear to flow.
Oh then! will Nature
Speak in accents mild,
A parent's anguish for a
Suffering child.
Then will a sigh
Escape the pensive head,
A passing tribute
To the untimely dead.

The memorial was restored in 1986 to mark the Centenary of the Trade Union Congress.[23]

Lockwood poet Fred Brown wrote T'Shadder Show in the 1950s in memory of the victims of the fire:[24]