Built earlier than the more well-known Piece Hall in Halifax, the Huddersfield Cloth Hall dominated the town in the late 1700s and provided a dedicated market building for the trading of finished cloth.

Huddersfield had been granted the right to hold weekly markets in the Market Place since the 1670s. However, the subsequent growth of trade meant that the market square became too small and clothiers had reportedly begun displaying their wares on the walls of the Parish Church. A number of specialist markets were subsequently set up, including the Beast Market.[1][2]

The Cloth Hall was built circa 1766 by Sir John Ramsden and was the largest building in Huddersfield at that time. Unlike other buildings in the town, it was constructed of red brick and some sources state that the Brick Buildings on the corner of New Street and Cloth Hall Street were built with the leftover bricks.[3]

The Leeds Intelligencer reported on the opening in December 1766:[4]

We hear from Huddersfield, that the grand Cloth-Hall or Market-Houſe, built there at the ſole expence of Sir John Ramſden, Bart. is now open'd : 'Tis imagin'd it will contain two thouſand Clothiers, and does great honour to that town and neighbourhood, as well as to the worthy proprietor.

Initially the Cloth Hall was a single storey structure, but a second storey was added in 1780.

Following the construction, a number of streets were laid out, including Cloth Hall Street in the early 1790s where the King's Head and the White Hart Inn were built.[5] Market Street was also extended southwards to run along the main eastern entrance of the Cloth Hall.

In 1864, the interior of the building was altered by the addition of a north-south transept. However, by then, a number of cloth manufacturers had begun leasing private warehouses in the immediate vicinity and sales were conducted there rather than at the Cloth Hall. As production became increasingly automated, many mills moved to selling cloth from their own mill offices and attendance at the Cloth Hall went into decline.[7]

As early as 1880, the local press was reporting claims that the "old and ugly Cloth Hall" would soon be pulled down as it had "long since lost its reason for being".[9]

A comparison of the Ordnance Survey's 1851 and 1890 Town Plans shows that 21 external stone buttresses had been added to the building by the late 1840s in order to stop the outer walls from collapsing. By the late 1800s, the number had increased to 30.

By 1924, a Post Office branch had been opened in the Cloth Hall, making use of one of the former entrances.[10] Despite Huddersfield Corporation offering space within the hall for a low rent — reportedly the lowest rent in the town — much of the hall remained unused and photographs from the early 1900s appear to show portions of the brickwork in poor condition. 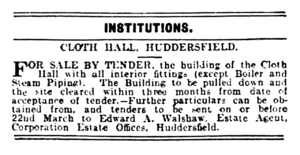 The 1920s saw increasing demand on the available space in the town and it was felt the building had outlived its usefulness. In June 1929, the Town Council decided to demolish the Cloth Hall and initial plans were drawn up to build a much-needed public library. Although the Cloth Hall was demolished in 1929/30, parts of the entrances — including the clock tower — were re-erected in Ravensknowle Park in 1932[11] to form a shelter and gateway within the grounds.[12]

The demolition disturbed a large nest of rats, described as being like small dogs, which caused problems for local shopkeepers and also for residents as the rats spread outwards into neighbouring residential areas. One shopkeeper told a reporter from the Leeds Mercury that he planned to mix bread crumbs with plaster of Paris — "I don't know what it'll be when [the rats] have eaten it, but anyway, I don't think it will be altogether healthy."[13]

Ultimately the plans for the library fell through and area was used as a car park until the mid-1930s when it was leased to Union Cinemas Ltd. who built the Ritz Cinema (later renamed the ABC Cinema) on the site.

In the mid-1980s, the cinema was knocked down and much of the site is now occupied by a supermarket.

It is a large circular edifice, two stories high, divided, on the one side, into separate compartments, or shops, and, on the other, into open stalls, for the accommodation of the country manufacturers of woollen cloths. There are also two central avenues of stalls, for the same purpose, and the number of manufacturers now attending there on the market day (Tuesday) is about 600. If to this be added, the great number (particularly in the fancy line) who have ware-rooms in various parts of the town, some estimate may be formed of the immense extent of business transacted weekly in Huddersfield. The doors are opened early in the morning of the market-day, and closed at half-past twelve o'clock at noon, they are again opened at three in the afternoon, for the removal of cloth, &c. Above the entrance is placed a cupola, in which is a clock and bell, used for the purpose of regulating the time allowed for doing business.

White's Directory of the West Riding of 1837:

The Manufacturers of Huddersfield and the surrounding villages, are principally woollens, consisting of broad and narrow cloths, serges, kerseymeres, cords, &c., and fancy goods to a great extent, in an endless variety, embracing shawls, waistcoatings, &c., of the most elegant patterns, and the finest fabric, generally composed of worsted, silk, and cotton ;— some wholly of the first, and others containing an admixture of it with one or both of the other materials. Formerly the buyers and sellers of cloth met in an open square ; but in 1765, a commodious Cloth Hall was erected for their accommodation, by Sir John Ramsden ; and it was enlarged by his son in 1780. This building, which is two stories high, forms a circle of 880 yards, with a diametrical range, one story high, which divides the interior parts into two semicircles. The light is wholly admitted from within, there being no windows on the outside, by which construction security is afforded against fire and depredation. The hall is subdivided into streets, and the benches or stalls are generally filled with cloths, lying close together upon edge, with the bosom up for inspection. Here, in brisk times, an immense quantity of business is done in a few hours. The doors arc opened early in the morning of the market day, which is Tuesday, and closed at half past twelve o'clock at noon ; they are again opened at three in the afternoon for the removal of cloth, &c. Above the door is a handsome cupola, in which a clock and bell are placed, for the purpose of regulating the time of commencing and terminating the business of the day. The hall is attended by about 600 manufacturers, mostly from the country, and many others have ware-rooms in various parts of the town.

The manufacture of woollens and fancy goods, which is carried on to a very great extent, both in the town and in the adjacent villages, consists of broad and narrow cloths, kerseymeres, serges, and cords, shawls, waistcoatings, and other fabrics of cotton, worsted, and silk, in various combinations, and of the most elegant patterns. For the better accommodation of the manufacturers and purchasers, a Cloth Hall was erected by Sir John Ramsden in 1765, and, from the great increase of business, enlarged by his son in 1780. The present Hall, which is two stories high, incloses a circular area 880 yards in circumference, divided into two semicircles by a range of building one story high, forming a diameter ; and the semicircles are subdivided into streets of shops, or stalls. Above the entrance is a handsome cupola, with a clock and bell for regulating the opening and shutting of the Hall, which is wholly lighted from within the area, and on market-days is open from an early hour in the morning, for the transaction of business, till half past twelve, when it is closed till three o'clock, and again opened for the removal of the various articles exposed for sale. Some hundreds of manufacturers attend the Hall on the market-days, mostly from the country.

On the left hand side of Market Street, opposite to Cloth Hall Street, modern shops now stand on the site of Huddersfield's Cloth Hall. Built in 1766 by Sir John Ramsden the hall helped to ensure the town's development as a centre of the textile industry. Constructed, unusually, of red brick the Cloth Hall was a circular building lit from an inner courtyard. In its heyday clothiers came from all the surrounding villages and buyers from as far as Leeds, Manchester and London. With the development of the fancy trade in the mid-nineteenth century the need to keep designs secret led to the clothiers conducting their business from small rooms built for the purpose in local inn yards. Consequently, the importance of the Cloth Hall declined and, in 1876, it was altered and fitted out as a general market, a purpose it served for four years until the new market hall was opened in King Street in 1880. The lettings for the stalls in the Cloth Hall were put up for auction on the 1st January 1877, the highest bid being £69 and the lowest £9. Bidders included shoe makers, fent dealers, earthenware dealers, oyster sellers, cheap-jacks, milliners and drapers. In 1881, after the market had moved on, the ground floor of the hall became an Exchange and News Room.

When, in the late 1920s, the future of the Cloth Hall was considered by the Corporation there were few Councillors in favour of retention. The site was regarded as of more value than the hall and so it was demolished in 1930. There were hopes that a public library would be built on the site but these were dashed when the Corporation announced that the financial climate of the times precluded such a scheme. Subsequently, the site was sold and in 1935/36 the Ritz (later the A.B.C.) Cinema was built. Arguably, the Ritz was the most luxurious cinema in the town and many of our readers will remember it in its heyday when films played to full houses and people were willing to queue to gain admittance. They will remember too the magnificent organ which was played with many fanfares and much flourish during the intervals. In 1984, despite pleas for its retention as a theatre, the cinema was demolished. Once again the value of the site had proved too great to withstand.

During its lifetime the Cloth Hall was often criticised for its lack of architectural merit — it was more than once described as downright ugly — and this was one factor that led to its demolition. But, when we compare it with what is on this prime site today the thought cannot be avoided that the Cloth Hall with its historical associations was handsome enough as, for that matter, was the Ritz.

The entrance was saved from demolition and re-erected in Ravensknowle Park.