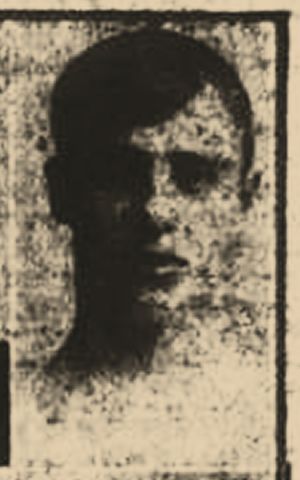 George Garside, a weaver, married Mary Schofield, from Stainland, in the late summer of 1869 and they set up home a few doors along from George's widowed mother Hannah and his brother Joseph and his wife Mary Ann, on Plover Road in the centre of Lindley.

Their son Joe was born the following year. Two other sons followed shortly: Sam in 1873 and Fred in 1876. The family stayed on Plover Road and the boys all eventually worked in the textile industry as warpers.

Tragedy struck in 1877 when George died at the age of only 31 leaving Mary a widow with three young children to support. Life would have been very hard for Mary and she would have had to rely on relatives and the Poor Law, which was by no means generous.

In the spring of 1880 Mary married Joseph Whitaker, a mason's labourer, and the couple, along with Mary's three children, moved to Quarmby Fold. Their first child, George Herbert, was born at the very end of 1880. A daughter, Jane Ann, was born in 1884 and a son Charlie was born in 1886.

Unfortunately Mary was widowed for a second time in 1885, this time with five young children and another expected. Her oldest son, Joe, had by this time left school and was at work. By the census of 1891, when the three oldest were at work, the family had moved back to Plover Road — no. 3, a house with only three rooms — in the centre of the village and had taken in a boarder, no doubt to help with the finances: John William Schofield, aged 23, was almost certainly a relative of Mary's.

The youngest children almost certainly attended Oakes Board School on nearby Wellington Street.[1]

At the beginning of the following century Mary and the family were still on Plover Road but were now at no. 15, though this seems to have been no bigger than their previous house — three rooms in addition to a kitchen. Things were a bit easier as Joe Garside had moved out after marrying in the early 1890s,

In 1911 they were still living at 15 Plover Road but by that time only Fred, Jane and Charlie still lived at home; in fact Fred had put himself down as the "head of the household", since at age 35 and single that seemed the most appropriate description.

Both Fred and twenty-four-year-old Charlie worked as handloom weavers. Jane was a mender. Charlie at least, worked at Smith and Calverley's mill along Plover Road where he eventually became foreman. He was also an accomplished runner in local sports events.

Charlie was also active politically: he was secretary of the Lindley Conservative Club and also a member of Oakes Working Men's Club on Wellington Street. At the Tory Club he would have know Arthur Brook — who was killed in April 1918 — and his father Ben, who were stalwarts of the Club.

Enlisting in the army on 17 November 1916 — which means he may have waited to be called up — Charlie served in the 9th Battalion of the Duke of Wellington's — a Service battalion of Kitchener's New Army — as a stretcher-bearer. He would have arrived in France early in the New Year.

After serving for over a year at the front, Charlie was killed in the German offensive of spring 1918, dying of wounds with many others on 23 March. He is buried with over 2,000 others in the Dernancourt Comminal Cemetery, Extension, 3 kilometres south of Albert in the Somme area.

The army spells Charlie's surname with two "t"s. This was never the case in the census or on the memorial in St. Stephen's church.