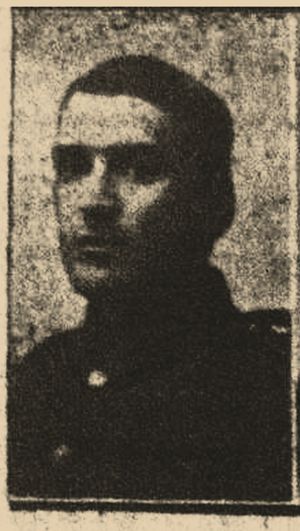 Charles Royle was born in Salford in 1883, the son of Thomas Royle a railway carter and his wife Hannah, who were both born in the 1840s. Described as an "engineer" in the 1901 census, Charles was working as a die setter in a wire drawing works in 1911 and it was this trade that probably brought him to live in Lindley and work at the Sykes factory on Acre Street.

On 27 June 1908, at Stowell Memorial Church in Salford, Charles married Ellen Jenkins, the daughter of Thomas Jenkins, a commercial traveller. Charles described himself as a "foreman mechanic". Charles father, Thomas, was said to be "deceased". By 1911 the couple, who were by then living on Rothwell Street in Salford, had two children, Elsie who had been born in 1909 and Harry, who was only six months old at the time of the census.

Charles joined the 5th (Territorial) Battalion, the Duke of Wellington's West Riding Regiment on 3 September 1914 when many Lindley men enlisted following a local and national recruiting drive and his medical was undertaken by the battalion medical officer, Dr Demetriadi — who himself would die as a consequence of war service &mhdash; at Huddersfield. Charles was said to be 5' 4½", of "good" physical development and perfect vision. The address Charles gave was 25 Victoria Street, not far from the factory on Acre Street where he was employed.

After initial training and service on coastal defence the battalion embarked for France on 14 April 1915 and Charles was promoted Lance Corporal in October 1915. On 26 January 1916, Charles was admitted to hospital with a "contuse wound to the leg" which he signed to say "was not caused by military service". This continued to keep him away from the Front at Wimereux and then Boulogne hospitals. He was back with the 5th Battalion by the end of spring and was promoted full corporal in April.

Charles was killed at the very end of the Battle of the Somme in November 1916 during a patrol in No Mans Land to reconnoitre the enemy wire. They exchanged fire with an enemy patrol, pursued them and took one prisoner. In the confusion Cpl Royle never returned to the company position and was presumed dead.

The battalion diary recorded the incident and that it was otherwise "a quiet day".

Charles was eventually interred at the Foncquevillers Military Cemetery, close to where he died. While Charles is not remembered on the memorial in St. Stephen's church, he was recorded on the running Roll of Honour compiled by the church during the war.

Charles' death was reported in the Huddersfield Examiner on 30 November when it was stated that the family had received a letter from an army chaplain.

Ellen received Charles' personal belongings back in May 1917 and a month later learned she had been awarded 24/5d pension as a dependent with two children.

An aunt of Charles was living in Blackpool at it may be for this reason that Ellen had moved to the seaside town by 1919 and this may be why his name was missed off the memorial inside St. Stephen's. There is no evidence that she ever re-married.

The following extract is taken from the 1/5th Battalion's War Diary, '14.11.1916. At 4am a patrol left our sap K.3.b.70.95. to reconnoitre enemy wire. After proceeding 50 yards patrol saw an enemy patrol which got between them and our lines, upon which our patrol began to retire so as to approach the hostile patrol. The Germans saw our men when they were within 15 yards and threw 2 bombs. Our patrol fired their rifles into them and a scuffle ensued. The officer and 3 of our patrol pursued the enemy and secured one prisoner. The rest succeeded in getting away. Of the remaining two of our patrol only one returned. A search party failed to find the missing man, a Corporal'.