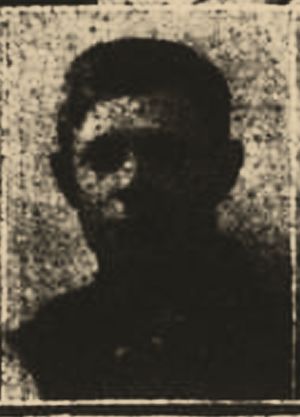 Charles Henry Kitson was the son of John Edwin Kitson and Lydia Ann Green who married in Huddersfield at the end 1875. By the time Charles was born on Christmas Eve 1894, there were already three children in the family: Leonard born in 1885, James Lawrence born a year later, and Lily, born in 1889.[1]

Strangely, father John is absent at the time of the 1891 Census and while Lydia is not widowed — two more children would be born in the 1890s — she does give an occupation: woollen weaver. It was most unusual for married women with children of school-age — and Leonard and Lawrence were six and five years old — to be working.

In 1891 the family were living at Gosport in Stainland, just beyond Outlane, where Charles had been born two years earlier.

By 1901 Lydia, now a widow — John had died in 1892 — was living with Leonard, Lawrence, Lily and Charles, in four-roomed cottage at Sowood Green, a little further out and it was here that Charles attended the Board School. Lydia was no longer worked as a weaver but for herself as a baker, a job she could do while having school-age children. The two oldest boys were millworkers.

Sadly, Lydia died on 23 April 1905 when the family were living at Tram-terminus, Outlane.[2] In her will she left some £28, probably about a year's rent on the houses in which she had lived.

At this time the Kitson children were marrying and setting up homes for themselves: Leonard in 1909 and Lawrence in 1910.

By 1911 Charles was living with James and his new wife Amanda at Cole Farm, Outlane. Charles, at only 17, worked as "Woollen Piecer" and as James was a farm labourer it is likely that the house came with his job. As a young man he was a member of the Outlane United Methodist Sunday School.

By the time the war started Charles was working in the more skilled job of spinner at Peckett's mill in Oakes, a tram-ride from his address at Outlane. In his spare time he was a member of Outlane Brass Band. Margaret Stansfield in Huddersfield's Roll of Honour 1914-1922 gives an address on Lindley Moor Road, Brooks Buildings. She also says he was married though this has proved impossible to confirm; however it would be unusual for him to live apart from family unless he was married.

Charles joined the army on 14 November 1916, a month before his twenty-second birthday and probably after being conscripted. He served in the South Staffordshire Regiment and was briefly in the Regimental Band, playing the cornet.

Charles must have been in France by early 1917. He died of wounds a year later at the No. 56 Casualty Clearing Station, in the first days of the Battle of St. Quentin, in the German spring offensive of 1918, Operation Michael. He was buried at the cemetery established by C.C.S. and which fell into German hands soon after.

Locally, Charles is remembered at his local church, the Bethal United Methodist at Outlane, and on the Brighouse War Memorial, which may be where his family were living after the War.