In the 1851 Census, the family were living in Mirfield and Hallas was named as "cabinet maker employing 1 journeyman & 2 apprentices".

The 1861 Census listed him as a joiner living in Hull, with 3 other joiners residing at the same house, but he soon returned to Huddersfield.

Towards the end of 1866, he established the Huddersfield Pig Protection Society which held its first meeting on 3 December 1866 at Richmond Inn on Manchester Road.[4] His son, Joseph, acted as the secretary.

From 1868 until the late 1880s, he regularly won prizes in local agricultural shows for his pigs and sows — some of these prizes were sponsored by his own Pig Protection Society!

By 1871, he was living at 47 Manchester Road, where he lived for the rest of his life, and working as an organ builder. In February that year, he was named as the chair and vice-president of the Paddock Horticultural, Floricultural, Pig, Poultry and Dog Association — again, his son Joseph was the secretary, so it seems likely this was a rebranding and expansion of the Pig Protection Society.[5] In May 1873, both father and son were treasurer and secretary respectively of the Longroyd Bridge Floral and Horticultural Society. 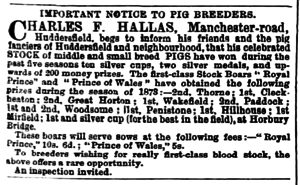 In a 1873 newspaper advert in which he offered to loan out his prize boars to "serve sows", he claimed to have won "ten silver cups, two silver medals, and upwards of 200 money prizes" over the previous 5 years.

In May 1876, the Charles and Joseph sued the Paddock Horticultural, Floricultural, Pig, Poultry and Dog Association[6] for non-payment of prize money.[7] It was alleged that Joseph had visited the other winners who had not received their prize money and offered to "buy" their prizes (at a value lower than the prize) from them, so that he could increase the amount he was suing the association for.

Charles' son Joseph had worked as a clerk and accountant in Huddersfield, but apparently moved to Hull in January 1878 to establish himself as a "general dealer".

In July 1879, a bankruptcy petition was filed by Messrs. Edwin Sykes and Son, 33 Market Street, Huddersfield, on behalf of Joseph whose liabilities were eventually recorded as £1,010 15s. 2d. with assets of only around £36. John Henry Thornton, an auctioneer and valuer of Queen Street, Huddersfield, was appointed the receiver. At a meeting of the creditors, it was revealed that Joseph had recently made out a bill of sale to his father for over £400.[8]

On Monday 6 October 1879, Joseph appeared before the Huddersfield Borough Police Court accused with fraud and embezzlement by Ann Nicholls, a draper of Paddock, and Mary Broadbent of Longroyd Bridge. The bench, which consisted of the Mayor, Alderman Walker, and Mr. A. Crowther, dismissed both charges.[9]

On 3 December 1879, Joseph Hallas was formally declared bankrupt.[10] At a further hearing on 5 December, the Registrar, Dr. Rollit, noted that the case "had about it many of the endicia of constructive, if not actual, fraud."[11] Rollit ordered an investigation of the circumstances surround the "bill of sale given by the debtor to his father"[12] but seemingly was not able to prove it as fraud.