Charles Codrington Pressick Hobkirk was a local bank manager, naturalist, scholar and author of Huddersfield: Its History and Natural History (1859).

In November 1856, he gave a lecture entitled "The Age of the Earth" as part of the Early Closing Association Lectures, in which he argued that geology proved that the Earth must be older than the 6,000 years stated in the Bible. At the suggestion of the chair, Rev. J.W. Town of St Paul's, it was proposed that the lecture be repeated before a larger audience at the rooms of the Young Men's Christian Association (YMCA).[3]

In January 1857 he lectured on the topic of "Astronomical Discovery" at the YMCA in which he discussed "the various difficulties met with by the early astronomers ... and of the persecutions suffered by some for propagating opinions which were then considered as heretical, and contrary to Scripture."[4]

His next lecture was given in February on the topic of "Fossil Reptiles", which he gave an overview of "the different orders into which these stony monsters have been divided, dwelling most particularly upon the saurians — a class whose immense size and structural perpendicularities render [them] so remarkable."[5] 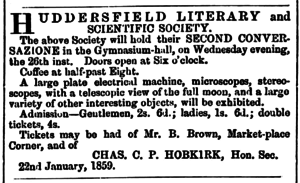 He was an initial member of the Huddersfield Literary and Scientific Society and delivered a paper on "Coal" at their meeting held on 30 March 1857 in which he discussed the various theories about how it was originally formed.[6]

In January 1859, the Chronicle recorded that Hobkirk was now the secretary of the Huddersfield Literary and Scientific Society — a role he retained until the mid-1860s, after which time he was the president until at least 1879 — and he delivered a paper "On the Progress of Science During 1858" at their second annual meeting, which took placed at the Gymnasium Hall on 26 January. Among the topics he covered were the Victoria Bridge in Montreal[7], the Atlantic telegraph[8], Donati's Comet[9], the "curious experiments of [William Robert] Grove"[10], the 1858 solar eclipse[11] and the "economical uses of glycerine in preserving meats".[12]

The first edition of his Huddersfield: Its History and Natural History book was published in May 1859, with a second edition published in 1868.

A copy of the book was placed in a "hermetically-sealed leaden box" which was inserted into a cavity of the foundation stone of the Mechanics' Institute on Northumberland Street as a time capsule during the stone laying ceremony in October 1859. Other items placed in the box included copies of the Times, Leeds Mercury, Huddersfield Chronicle and Huddersfield Examiner newspapers, the annual report of the Institute for 1859 and several coins.[13]

In 1860, together with Mr. Schofield of St. Paul's school, he was involved with the formation of the Huddersfield Church Institute, which had the objectives of the "maintenance and advancement of the principles of the Church of England, the encouragement of kindly intercourse among its members, and the promotion of general knowledge in subordination to religion."[14] Hobkirk is known to have served on the committee of the institute in 1862 and 1863.[15]

The 1861 Census lists him as a 24-year-old of "no occupation", however he soon gained employment as a bank cashier, possibly with the help of his future father-in-law, bank manager John Barwick.[16]

In August 1861, the Chronicle reported on the results of the recent Huddersfield Literary and Scientific Society examinations, which included the following for Hobkick who was the only person to be awarded medals:[17]

By 1862, Hobkirk was involved with the Huddersfield Naturalists' Society and gave a length opening address at their inaugural exhibition in September 1862.[18]

He married Kate Amelia Barwick (1836-1899)[19] on 5 August 1863 at St Paul's Church, Huddersfield, and they moved to Dewsbury where they raised a family of seven children:

On 30 November 1863, he gave a lecture entitled "On the Geological Evidence in the Antiquity of Man" to the Huddersfield Literary and Scientific Society.[27] The following year, he lectured on 14 November 1864 "On the Uniformity of the Physical Laws Throughout All Past Geological Ages".[28]

On 19 March 1866 he gave a lecture at the Huddersfield Naturalists' Society on the lower Cryptogamia[29] and "exhibited a great many specimens of mosses, hepaticæ, lichens, and fungi, referring at some length to some of the different species, and the manner of reproduction of the hepaticæ."[30] In October, the Society gave a week of lectures and Hobkirk spoke on the topic of "Geology."[31]

In Monday 3 December 1866 he gave a paper title "Some Considerations on the Origin of Species" at the Huddersfield Literary and Scientific Society meeting. Two days later, he lectured on "The Study of Botany" at the Marsh Working Men's Institute and reportedly, it "was most instructive, and the subject was treated in such manner as to interest and please the audience."[32]

At the end of January 1867, he was appointed one of the officers of the Huddersfield Archaeological and Topographical Association for that year.[33] In September that year, he gave a paper in favour of Darwin's Origin of the Species at the Huddersfield Naturalists' Society meeting in which he was opposed by Mr. John Challand.[34] On 16 December, he lectured "On the Formation of Valleys" to the Huddersfield Literary and Scientific Society.[35]

The expanded section edition of Huddersfield: Its History and Natural History was published in 1868. Around the same time, Hobkirk was elected the president of the Huddersfield Literary and Scientific Society[36] and, on 19 October 1868, he gave the opening address of the Literary and Scientific Society's 12th season.[37] This address was reported as a lengthy one which touched on "some of the questions of general science and literature, and concluded by alluding to the recent advance made in natural science, and the utility of the experiments made by Mr. Darwin.[38]

The annual meeting of the Literary and Scientific Society took place in April 1869 and Hobkirk reported that, although membership had increased over the previous year, some of the committee members felt that the attendance at meetings had been to sparse as to be insulting to those who had taken the time to prepare papers. It was also felt the lack of a better facilities, such as a permanent museum and a lecture hall, had hampered the success of the society. However, it was reported the summer Field Club excursions have proved very successful.[39]

He was elected a churchwarden at St Paul's in April 1870.

In May 1870, he assisted in the capture of a runaway snake on Cross Queen Street which it was believed had escaped from the Gymnasium Hall the previous autumn.[40]

In September 1870, he presented a paper on "The Mosses of Huddersfield" at the Naturalists' Society, which "was illustrated with numerous beautifully-mounted specimens from his rich collection." The paper was "listened to by a large and appreciative audience."[41]

The 1871 Census listed the family residing on Brunswick Street, Huddersfield.

In March 1871, Hobkirk gave a paper a entitled "Can Darwinism Accounts for the Existence of Man?" to the Literary and Scientific Society. In his view, the differences between apes and man were too many and pointed "to the conclusion that Darwinism is insufficient and unequal to the task."[42] In December 1871, he lectured on "Professor Huxley's and Sir William Thomson's Theories of Life", neither of which he agreed with — Huxley[43] proposed that all life stemmed from protoplasm whilst Thomson[44] theorised that life may have arrived on Earth via a meteorite. Hobkirk was strongly of the opinion that meteorites "could not possibly carry seeds or ova capable of being brought into life."[45]

During the 1870s, Hobkirk lectured less frequently, but continued his links to both the Literary and Scientific Society and the Naturalists' Society, acting as president to the latter.

Hobkirk's A Synopsis of the British Mosses was published in 1873.

The London Catalogue of British Mosses, which he jointly authored with H. Boswell for the Botanical Locality Record Club, was published in 1877[47]. Hobkirk presented a copy to the Scientific Society's library in August 1877.

By around 1878, Hobkirk had become the president of the Huddersfield Paxton Society.

At the annual Huddersfield Literary and Scientific Society's Microscopical Soirée in January 1879, Hobkirk presided. As well as the microscopes, it was recorded that Mr. Jospeh Wood's "patent atmospheric stereoscope was a source of considerable amusement and pleasure to the youngsters"[48] and Mr. F.W. Dammann exhibited an Alexander Graham Bell telephone which "worked with success".[49]

On 2 August 1880, Hobkirk led a group from the Yorkshire Naturalists' Union on a guided walk to Marsden. Starting from Greenfield, they passed "Bill's o' Jack's, DIggle, Saddleworth, and Standedge by Redbrook reservoir" then down to Marsden. A second group was led by S. L. Mosley "from Lockwood, over Crosland Moor, skirting Dungeon Wood to South Crosland, through Honley Woods to Meltham, thence past Blackmoorfoot reservoir to Deer Hill, over the moors to Wessenden Head, and down that valley to Marsden."[50]

The 1881 Census listed the family living on Market Place, Huddersfield. However, within a couple of years, they had moved to Dewsbury.

On the evening of Saturday 25 October 1884, Hobkirk was invited back to the George Hotel, Huddersfield, where he was presented with "a very handsome silver tea and coffee service" and a book signed by the present presidents of the Huddersfield Literary and Scientific Society, the Naturalists' Society, and the Paxton Society. A number of gentleman spoke glowingly of Hobkirk's endeavours over the past 30 years.[51]

From the 1890s onwards, he was a shareholder in the Great Western Railway.

By 1891, the family was residing at Bank House, Manor Road, Dewsbury and Hobkirk had become a bank manager.

His wife, Kate Amelia Hobkirk, died on 18 September 1899, aged 63, and, by the time of the 1901 Census, he had retired to Oakburn Road, Ilkley, where he lived with his two daughters.

Members of the Huddersfield Naturalists' Society | People | Writers and authors
This page was last modified on 2 August 2018, at 07:10.