The Beaumonts, all Lindley-born, lived at 13 Holly Bank Road not at 33 as recorded by the Commonwealth War Graves Commission, though they may have moved there after 1911. Number 13 was one of that small group of houses that then stood at the top of the road where there is now a car park. We can tell from the 1911 census that it was a small house with only three rooms. Emma Beaumont was a widow and in 1901 there were four children living at home so it must have seemed quite crowded even to people used perhaps to less space than we are today.

John Beaumont and Emma Schofield married in St. Stephen's, Lindley, on Christmas Eve 1875. John gave his occupation as weaver, the same as that of his father, George, and his address as Outlane. Emma came from Lindley. Both John and Emma could sign their names.

Their first son, Edwin, was born the following September and christened in St. Stephen's on the 29 October. Arthur followed two years later and Ede was born a month before the 1881 Census.

At this they were living at 13 Holly Bank Road, the house the family would still be living at over thirty years later. It was described as having four rooms. 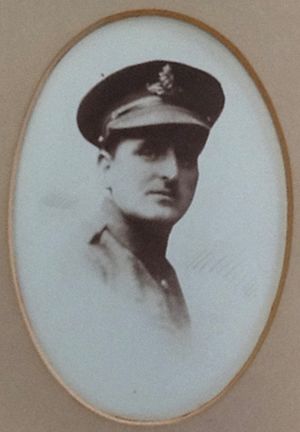 A daughter, Ann, was born in 1884 and Charley a year later on 8 August and baptised at St. Stephen's on 27 September. A third daughter, Sarah Alice, was born in 1890. Charles, and probably the other children too, attended the Church school a few yards further down Holly Bank Road from where the family lived. The schoolmaster’s house was just at the corner of George Street.

Tragedy struck the family in 1892: in the spring, John died at the age of only 51 and in September, little Sarah Alice died in awful accident. The events were described at the inquest held in the Fleece Inn at the centre of the village and yards from where the family lived. Distracted from her washing by a neighbour, Sarah Ann was left playing with a handkerchief that was in the tub. She was seen to be missing and an extensive search of the area for over twenty minutes by her sister Ede was fruitless. Emma Beaumont then went out to look during which time eleven-year-old Ede spotted her in the tub. Her screams alerted Harry Hewitson, a lamplighter, who was passing and he rushed in and lifted the child out. She was declared dead soon after by Dr. Dyson. The coroner insisted no blame lay with Emma Beaumont.

Emma a widow raising three children of school age, had to carry on: only Edwin was working, as a cloth dresser, aged 15. Charles attended St Stephen’s and sang in the choir and also became a member of the Young Men's Bible Class.

Emma seems to have taken work as "charing" and then ran a small shop, probably from her home; due to "insufficiency of income" she was receiving out relief of four shillings a week from the Poor Law authorities before the end of 1892.

By 1901 Charlie was old enough to have left school and worked as a bobbin winder and spinner — by 1911 he worked as a warehouseman at Messrs. Liddle and Brierley of Stanley Mills in Marsh. In fact, the whole family worked in the industry as card dressers, presser and warpers. This must have made keeping house considerably easier for Emma.

There was a small mill up Holly Bank Road, in Temple Street, a few yards from where they lived, and some of the family may have worked there. Alternatively, they could have walked a little further to the larger mill complexes along Plover Road.

No service record for Charles Beaumont survives but we know he enlisted on 14 March 1915 in the Royal Artillery and not in the Duke of Wellington's like many other Lindley soldiers. Having no 1914-15 Star suggests he was not in France before 1916.

Charles died in the Ypres Salient on 25 June 1917, just before the start of the Battle of Passchendaele, and is buried in a cemetery near the town. He is remembered on the memorial in St Stephen's, the church where his parents had been married over forty years earlier and he and brothers and sisters had been baptised.