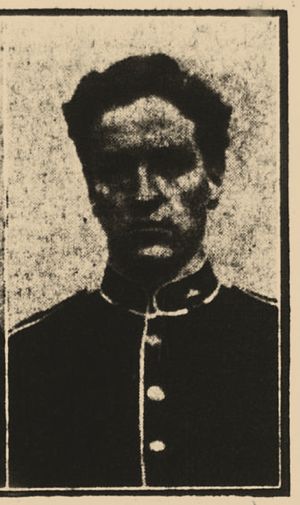 BACKHOUSE, CHARLES. Private. No 2547. 1/5th Battalion Duke of Wellington's Regiment. Born Thurstonland. Son of James and Sarah Backhouse of Brockholes. (later of Leeds). Attended Brockholes Wesleyan Church and was secretary of the Wesley Guild. Embarked for France in April, 1915. Was badly wounded by shrapnel on the morning of 1.7.1915. Was on his way to his dugout to prepare a meal when a shell burst near him and he was struck on the head. Was taken to a dressing station where he died a week later, on 11.7.1915. Age 26 years. Buried in FERME-OLIVER CEMETERY, ELVERDINGHE, BELGIUM. Grave location:- Plot 1, Row J, Grave 8.

It is with very great regret that I have to break the news to you that your brother Charles has died from his wounds received the other day. I wish to offer you my deepest sympathy in your great loss. I may say I feel it as keenly as anyone possibly can seeing that he has been my orderly for nine months and in close contact with me all the time. I am the one who knew his worth more than anyone else. He was the most faithful, clean, good natured boy in the whole battalion. He never ceased to look after me and I trusted him with all my private affairs and money so you can tell how I appreciated him. All the Company feel his loss very much indeed and they all have a good word for him. He was wounded just outside my dugout whilst doing his duty. He was a brave lad and shells did not frighten him and it was a most unfortunate thing that he was wounded by a shell. I am so far away from the hospital that I shall not be able to attend his funeral. I should have liked to have done so for my own feelings and also yours. Let this be an example to the Holmfirth young men and those who have not joined yet. I trust that the death of a noble young man like your brother are the means of the slacker coming forward to avenge his death. He was a lad to be proud of and I cannot praise him too highly. May you seek comfort in the fact that came forward to do his duty in this great war and that duty he did nobly and well and may God comfort you in your trouble is all that I his Officer whom he served so well can say.

5th Battalion, Duke of Wellington's Regiment | Huddersfield and District Roll of Honour | People
This page was last modified on 18 May 2020, at 00:21.