The Castle Refreshment Rooms were situated in Beaumont Park and opened around 1886, offering meals and drinks.

The lack of any refreshments for sale in Beaumont Park seems to have provided the park keeper with the opportunity to supplement his salary and a meeting of the Beaumont Park Committee on 8 April 1884 resolved that "in future the Park superintendent not be allowed to sell refreshments at the Park Lodge on Sundays." This decision sparked debate at the subsequent Town Council meeting on 16 April — whilst most were in favour of allowing the sale of refreshments, doing so meant the park keeper was neglecting his other duties.[1]

On 24 July 1884, the Committee travelled to the Park and inspected the ongoing works, which were mostly concentrated in the lower areas of the park. Whilst there, a proposal was considered by them for the provision of refreshments in the park, and it was resolved that "a refreshment room be erected [...] and the borough surveyor prepare and submit plans of the same for the consideration of the committee at a future meeting."[2]

By the time of the next meeting on 15 August, the borough surveyor, R.S. Dugdale, had submitted some preliminary plans. These were approved and Dugdale was asked to complete them and to estimate the costs.[3] Although it seemed most people agreed that the park needed to provide refreshments, concerns were raised by Councillor Chrispin at a Town Council meeting that the estimated cost of around £1,000 would be on top of the already spiralling costs of completing the park.[4]

At the meeting held on 16 October, the Committee agreed the exact location of the refreshment rooms and resolved that they should cost no more than £800 to construct.[5] 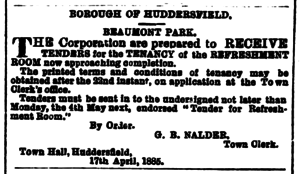 Notices also appeared for "joiners, plumbers and plastereres" (March 1885) and then for painters (April 1885). Tenders were tenancy of the "the Refreshment Room now approaching completion" were also invited in April 1885, although it would be another year before the building works were completed to the full satisfaction of the Committee.

Avison's tender appears to have fallen though as the Committee subsequently interviewed four married couples in August 1885 "with respect to the tenancy of the refreshment room". At the end of the meeting, it was decided that the tender of John Henry Field and his sister Emma Field, of Swan Lane, Lockwood, be accepted, providing he paid "all rates, taxes, and water rents" and provided "all necessary tables and furniture".[7] By February 1886, the agreement for tenancy had been signed.[8]

At the December 1885 Town Council meeting, it was reported that the cost of the refreshment rooms was now £2,165 — more than double the original estimated cost. At the end of a long debate about the cost of the park, the exasperated Mayor refused to allow Councillor Chrispin to continue.[9]

An inspection of the site — which had by now been dubbed "The Castle" — took place on 29 April 1886 and work was reported to have been completed. The Committee members took the decision to "purchase some furniture for the large room and the first floor dining room" and to approve John Henry Field's request to sell "British wines" and to apply for "a licence for music and dancing" on the premises.[10] A further inspection on 29 July was satisfactory, although it was proposed that a lightning conductor should be fitted to the building.[11]

Field's application to sell "sweet wines" at the Castle Refreshment Rooms was approved at the Borough Brewster Sessions on 1 September 1886.[13] John Henry's sister Emma died suddenly on 6 January 1890 of suspected heart disease, aged 48.[14] The 1891 Census shows John Henry Field living at the Refreshment Rooms with his wife, Mary Elizabeth, who he married in October 1885, and 22-year-old servant Agnes Lucas.

In March 1892, the sum of £242 was approved for improvements to the building, including work on the building's roof.[15]

In May 1893, the Parks and Cemetery Committee discussed the possibility of housing S.L. Mosley's natural history specimen collection at the Castle, which apparently numbered around 100,000 items. Mosley had written offering to donate his collection on the proviso that Huddersfield Corporation establish a dedicated museum.[16] However, Mosley felt the location was too small and preferred the offer of using Springwood Hall.[17] 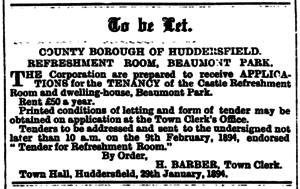 Ben Taylor Smith of 57 Northgate was the next tenant of the Refreshment Rooms, after his application was accepted by the Parks and Cemeteries Committee in February 1894.[18]

In December 1894, tenders were invited for the painting and redecoration of the Refreshment Rooms.[19]

Smith placed the following advertisement in the Yorkshire Evening Post in June 1895:[20]

FOR MAGNIFICENT SCENERY, SPLENDID FLOWER BEDS, LAKE, and PICTURESQUE NATURAL ROCKS go to BEAUMONT PARK, HUDDERSFIELD, the most beautiful park in the district. The minutes' walk from Lockwood Station (L&Y) or tram. No charge for admission. Refreshments and Cigars of the best quality supplied at "The Castle" in the grounds.

At around 3pm on the afternoon of Tuesday 2 April 1907, two women entered the Refreshment Rooms and told staff there that they had "seen some children near the body of a child at the bottom side of the park." The women left before their names could be taken and, upon investigation by a park gardener, the "body of a newly-born male child" was found near the Meltham Road entrance to the park. The infant had been wrapped in an "old grey frock skirt" and appeared to have been dead for at least a week.[21]

By 1911, former clothier and draper Amos Emblin of Holbeach, Lincolnshire, had taken over the tenancy, and is recorded residing there in the 1911 Census with his wife, Minnie Jane, and daughters Lily Allen (aged 26) and Daily Florence (21). He was still living their when died on 7 January 1914, aged 58.[22]

In March 1914, it was reported that structural defects in the tower of the Castle had been found after the ivy, which had grown over much of the tower, had been removed. The borough engineer was asked to "attend thereto forthwith."[23]

Minnie Jane and her daughters continued to run the Castle for a few months after Amos' death but, by June 1914, newspaper adverts had been placed offering "immediate possession".[24]

It seems likely the Refreshment Rooms were without a tenant from the summer of 1914 until early 1916, as the "question of rowdyism in Beaumont Park Castle" was raised at a Town Council meeting in October 1914.[25] The "matter of the tenancy" was later discussed in December 1915, implying that a tenant had still not been found.[26]

The Town Council meeting of 17 March 1915 recorded that an increase in funding would be required in the coming year, "necessitated by repairs to recreation grounds and to the Castle Refreshment Rooms in Beaumont Park."[27]

An article from July 1917 named 11-year-old Minnie Jenkinson as a resident of "The Castle, Beaumont Park", so it may be that her parents, Sam and Ann Jenkinson of Lockwood, had taken over the tenancy circa 1916.[28]