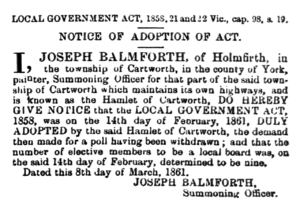 Cartworth Local Board was the local authority body primarily responsible for issues relating to public health in the township of Cartworth and was formed on 14 February 1861 with an initial membership of 9.

The Local Board District was defined as "that part of the said township of Cartworth which maintains its own highways, and is known as the Hamlet of Cartworth".

There were a total of 19 people nominated for election to the first local board, but 10 withdrew. Therefore the remaining 9 were automatically appointed without the need for an election:[1]