In 1879, a carillon[1] — a mechanical device for automatically ringing church bells — was installed in the newly-built bell tower of St. Bartholomew, Meltham. The device proved to be controversial and was eventually adapted in 1895 so that the bells could be rung again by hand.

The bell tower was added to St. Bartholomew's in 1835 and a peal of six bells — E, F#, G#, A, B and C# — were installed in the tower in February 1836, having been cast the previous year by W. & J. Taylor of Oxford. The clock was reportedly installed a few years later "at the sole expense of Mr. [Edwin] Eastwood's family".

In 1877, Edward Brook of Meltham Hall paid £5,000 to fund a refurbishment of the church, which was undertaken by architects Edward Burchall of Leeds of John Kirk & Sons of Huddersfield. Amongst the improvements were a new chancel ("in the Byzantine style"), a new organ by Conacher & Co. of Huddersfield, a panelled ceiling, and the galleries were replaced. The re-opening service took place on Friday 3 May 1878.[2] 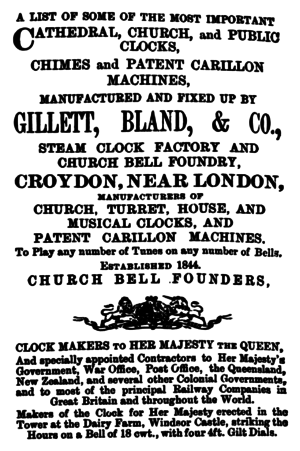 Brook then paid a £600[3] for a for a carillon to be installed in the church tower in 1879.[4] Built by Messrs. Gillett, Bland & Co., it necessitated the addition of four new bells — D, D#, E (octave) and F# (octave) — which arrived at Meltham in April 1879. The Huddersfield Daily Chronicle (26/Jun/1879) provided the following lengthy description of the device:

Messrs. Gillert, Bland, and Co.'s system has great advantages over others on the old system [in use] in Britain and on the Continent. On the old system the hammers have to be raised and let off by the projecting pins upon the musical barrel, and having first to raise the hammer before they strike the bells causes a great loss of time when rapid passages are required in the music, and when a large hammer or several have to be lifted, the strain upon the musical barrel is so great that is causes a jerking and unevenness of action, and retards the velocity of the barrel, thus throwing the music out of time. These barrels are generally pricked with seven or eight tunes, which cannot afterwards be changed or altered without considerable expense. No more than eight tunes can ever be played by the machines, and a keyboard is entirely out of the question ; moreover, these musical barrels, having to all the work of lifting the heavy hammers, have to be of great size and weight, so that it was only in very large towers that these chiming machines could be erected at all. In Messrs. Gillett and Bland's patented system all the defects in the old system have been entirely overcome, and the principals of the constructions of the machine under notice are entirely difference to all others, upon which it is a very marked improvement. It is only 3ft. 2in. long, 4ft. high, and 3ft. 2in. wide, and had it been made upon the old system, it would have been more than double the size. One of the most novel features and advantages of this automatic musician is, that instead of the hammers having to be lifted and let off by the musical barrel, as on the old system, the two actions of lifting and letting off the hammers are entirely separated, the hammers being kept continually raised ready to strike the bells, and are only allowed to drop when the pins on the musical barrel let them off. The instant they fall they are lifted again, the two actions being perfectly simultaneous. There is one lever to each hammer, at one end of which is a key operating on the musical barrel, and directly it is released by the pin on the musical barrel, the other end falls, and the hammer strikes the bell, and is instantly raised into the striking position again, by constantly revolving cams, so that the hammers are simply let off at one end of the levers, and lifted at the other. Thus the raising of the hammers has nothing to do with the playing of the music. This is done by the musical barrel, which is entirely relieved of the labour of lifting the hammers, which has no strain upon it, and therefore always revolves at the same rate, thus ensuring that the tune shall be played in perfect time and precision, no matter how rapid the passages might be. The musical barrels are made of hard wood, 10in. in diameter and 2ft. 1in. long, studded with over 3,000 brass pins, one eight of an inch square. The carillon machine has twenty levers, two to each bell, in order to enable several notes in quick succession to be played upon the same bell when necessary. There is a large fly or fan (similar to that in a musical box) fixed to an upright shaft for the purpose of regulating the velocity of the revolutions of the musical barrels. The motive power is obtained by weights of about half-a-ton, suspended from the iron barrel by a steel wire line and wound up up every twenty-four hours. By having a series of barrels — with seven tunes on each — which are inexpensive — any number of tunes can be played, and they can be changed anyone in a few seconds ; or instead of having seven tunes on a barrel, one long piece of music could be pricked upon it, such as a selection from an oratorio. [...] It is hoped that at some future time the parishioners will be able to raise the necessary funds, to that an ivory keyboard may be attached to the carillon machine, similar to a pianoforte finger-board, so that any musician can play tunes upon the bells with the fingers without the application of any more pressure upon the keys than is required for playing an organ. In fact, so slight is the pressure required that a child can let off hammers weighing 1cwt. each with the greatest facility.

According to newspaper reports, the device had been connected to the church's clock a new tune was to be played each day over a fortnight, repeated every three hours during both the day and night, and "can be heard at a great distance". The Chronicle reported that "hundreds have listened to them during the week and have expressed their delight."[5]

Two barrels had been purchased by Brook, with a total of 14 tunes:[6]

On the afternoon of 24 October 1879, Meltham blacksmith Alfred Thornton was by himself in the tower engaged in "putting a pin into the shaft belonging to the carillons of the church" when an accident occurred and he received a deep wound to his right forearm and a fractured elbow. Hearing Thornton's hammer fall to the ground, sexton Joseph Crosland called out to see if he was okay. Receiving no response, he climbed the tower and found the blacksmith who said to him, "Oh dear, fetch me down, I have hurt my arm." He was taken to Huddersfield Infirmary where the arm was amputated at the elbow but died the following week from blood poisoning. As Thornton gave no account of the accident, the inquest heard that he had likely caused the carillon's weights to be released by accident and their wire rope had sliced into his arm. A verdict of "accidental death" was returned.[7]

Although the carillon had a facility to play a standard peal ("by simply pulling a wire which is conducted to the vestry"), it was no longer possible for the bells to be rung by hand and this became a particular problem at funerals when a muffled peal could not be rung. Perhaps to prove a point from the beyond the grave, Meltham bell-ringer Watson Rayner "during his illness had expressed a desire to have a muffled peal rung after his funeral" — following his burial at Meltham, six of his fellow bell-ringers walked to Holmfirth where, "having obtained permission, carried out [Rayner's] wish by ringing a muffled peal on the bells there." In a critical article, the Huddersfield Chronicle reported that "this carillon machine [...] is looked upon by the inhabitants of Meltham with disfavour, and is designated by many the 'Irish Trig'."[8]

In 1882, the church's annual balance sheets recorded that upkeep of the carillon had cost £10.[9]

At the 1885 annual vestry meeting, "a long conversation took place respecting the bells being rung as they formerly were instead of by the machine, but it resulted in 'talk' and nothing else."[10]

20 February 1886 marked the 50 year anniversary of the bells first being rung and "a deputation [of bell-ringers] waited on the vicar and churchwardens" in February 1886 in an attempt to have the carillon disconnected so that they could rings the bells to celebrate.[11] Amongst those pleading the case was Abraham Woodhead of Bridge House, Meltham, and the approval of the vicar was given on the proviso that "subscriptions were obtained for defraying [any] expenses which might be incurred." Although the Chronicle did not report how the carillon was temporarily disabled, ringers from Almondbury and Meltham — including veteran local ringers Woodhead, Jonathan Hoyle, Joseph Shaw, Eli Hoyle, James Ratcliffe and George Brook, some of whom had taken part in the 1836 bell-ringing — rang sets of peals. Reportedly hundreds of people gathered in the Market Place to listen to the "sweet-toned bells."[12]

The machine was still in place a year later when the funeral of Abraham Woodhead of Bridge House, Meltham, saw a repeat of the bell-ringers walking to Holmfirth to ring the muffled peal.[13] However, special occasions such as Queen Victoria's Golden Jubilee in June 1887, the gifting ceremony of the Jubilee Recreation Ground in September 1888, and the laying of the three corner stones of the Odd Fellows' Hall in June 1894 saw the bells being rung by hand.[14]

The impasse was eventually resolved in July 1895 when Edward Brook offered to pay to have the carillon adapted so that it could be disconnected when required and the bells rung by hand.[15] When Brook died in January 1904, the flag on the church was set to half mast and a muffled peal was rung.[16]

After fundraising, the carillon was restored in 2016.[17]