Butterley Reservoir is the lowest of the four reservoirs in the Wessenden Valley and is the third to be fed by Wessenden Brook, below Blakeley Reservoir and Wessenden Reservoir. It was formed by an embankment placed across the brook near the site of Upper Bank Bottom Mills.

The reservoir was approved by the Huddersfield Corporation Waterworks Act of 1890, replacing an earlier scheme to build the Booth Reservoir.

The ceremonial first sod of earth was cut on 27 August 1891 by Alderman James Crosland, the Deputy Chairman of the Waterworks Committee, in the absence of Alderman Wright Mellor who was convalescing in Blackpool at the time. A full account of the ceremony, which took place in torrential rain, appeared in the Huddersfield Daily Chronicle the following day.[1]

A Town Council meeting in April 1892 listed some of the companies and individuals who were contracted in relation to the works:[2]

The workforce who constructed the reservoir were housed in accommodation at Upper Bank Bottom Mill and Lower Bank Bottom Mill, two water powered mills which had been acquired by the Corporation that were eventually demolished. The navvies also built their own club on Old Mount Road for socialising and this is now the Pule Side Working Men's Club.

In 1893, an outbreak of smallpox resulted in some workers being placed in isolation and then later transferred to Birkby so that the living accommodation could be thoroughly disinfected. A gratuity of £10 10s. was paid to Dr. James R. Kaye by the Waterworks Commission for helping to "stamp out what might have proved a very dangerous epidemic."[3] 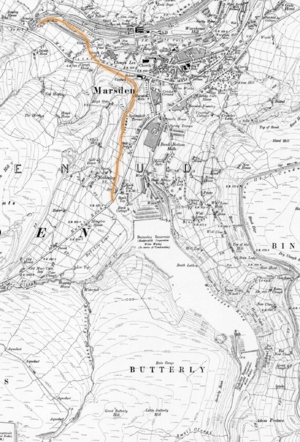 To deliver raw materials to the site during construction, a temporary tramway was built in 1894 running from Marsden Tunnel End to near the current site of Netherley Drive and Mount Road. Little evidence remains now of the 1½ mile tramway, other than the abutments for the small viaduct which carried it over the River Colne. This work was authorised by the Huddersfield Waterworks Tramroad Act of 1894.

Two sets of narrow gauge tracks were also laid on either side of the reservoir, with the western track crossing over Butterley Clough on a wooden trestle bridge and running up to the quarry situated at the lower end of Blakeley Reservoir. The tracks were run by two locomotives: the Blakeley and the Brooke.[4]

In February 1895, it was reported to the Town Council that work had come to a standstill due to "the severe and prolonged frost and snowstorms".[5]

By September 1901, as the reservoir was being filled, problems were identified with the underlying rock strata which caused the main embankment to leak.[6] By March 1903, it was reported that the construction costs had spiralled to £304,000 — more than double the original estimate — and that around a further £90,000 would be needed to remedy the leaks.[7]

The work was eventually completed in the summer of 1906 and the reservoir was filled to capacity by the end of the year.[8]

In November 1914, it was announced that the Corporation intended to buy a further 42 acres of land containing five farms in the catchment area of the reservoir in order to limit the chances of pollution.[9]

At least three workmen were killed during the construction of the reservoir:

In early August 1893, labourer Richard Brown fell around 18 feet into one of the pits, breaking two of his ribs. He was able to return to work by October.[11]

In June 1899, labourer Richard Johnson (aged 71) slipped on loose shale and sustained a fracture of the femur in his left thigh. He was treated at the Huddersfield Infirmary[12] and possibly died a few months later.[13]

In May 1940, the body of 76-year-old retired teamer and widower Enoch Walton of Binn Road, Marsden, was found at the reservoir. At the time of his death, he had been living with two of his daughters.[14][15]