Brownhill Reservoir is the lowest of a series of four reservoirs above Holmbridge that were constructed by Batley Corporation Waterworks between the 1872 and 1932 — the others being Riding Wood, Ramsden and Yateholme.

Batley Corporation applied to Partliament during the 1921 session[1] to build a new reservoir below the existing Ramsden Reservoir:[2]

At 289,000,000 gallons, this was to be larger than all of the Corporation's other reservoirs — Ramsden, Yateholme and Riding Wood — which had a combined capacity of around 220,000,000 gallons. The initial construction fund of £499,000 was later supplemented in 1928 with a loan of £150,000 from the Ministry of Health to cover "any additional expenditure required" to complete the reservoir.[3]

The valley had previously contained mill dams, marked as Batty's Dam and Middle Dam on historic O.S. maps. The latter was used by Brownhill Mills, a woollen mill which had fallen into disuse by the 1890s.

Advertisements for tenders relating to the construction of the reservoir began appearing in the press in January 1924 with preparatory work beginning in the autumn of that year. Amongst the companies involved in the construction were the Francois Cementation Company of Doncaster, who used liquid cement to help reinforce the groundworks.[4] The works were overseen by Messrs. Lehane, Mackenzie and Shand Ltd. of Denby, with Mr. Farmer acting as the on-site manager.[5]

A formal inaugural ceremony for the start of construction was held on 18 May 1925 at noon.[6] A temporary platform had been constructed on the hillside, where Alderman J.E. Oldroyd (Chairman of the Batley Corporation Waterworks Committee) pressed a button to fire gelignite shots placed where the reservoir's main puddle trench was to be situated. Afterwards, the assembled dignitaries had luncheon at the Parish Hall at Holmbridge.[4]

As part of the works, nine new houses were constructed at Wheat Close circa 1925/6, as compensation for residential premises lost to the reservoir.[7] The route of Brownhill Lane was altered and the loss of historic rights of way across the valley was compensated with a new footpath across the embankment.[8]

A series of temporary light railways, along with seven engines, were used to help move materials to and around the site. A line of 18-inch wide pipes were laid to convey the reservoir water to Batley, which necessitated carrying it across Digley Brook (Holmbridge), River Holme (Honley), Lees Head Beck (Dalton), Rivers Colne and Calder (Bradley), and the Spen (Heckmondwike).[9]

In March 1928, the Leeds Mercury printed a short piece explaining that it was common for navvies working on construction projects to be given nicknames. One man with the surname Smith applied for a job but was told, "we've enough Smiths on this job, so [now] you are Brown". Another common practise was to name navvies after their native town or after a personality trait, with "Cheshire Joe", "Welshy Dave", "Whistler Jack" and "Concertina Bill" given as examples.[10] 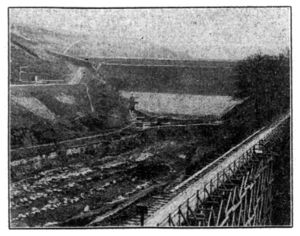 In November 1928, the Leeds Mercury reported that an estimated 286,000 cubic yards of earthwork had been required to form the 107 foot high embankment which spanned 900 feet across the valley.

In May 1929, the Leeds Mercury reported on the ongoing construction and noted, with a certain amount of irony, that the nearby village of Holme was currently suffering "a serious shortage of water" and would not benefit from the enormous new reservoir.[5]

By August 1929, the reservoir was beginning to be filled with water, although the Leeds Mercury speculated it would take several months to completely fill the new reservoir.[8] However, when the same reporter revisited the site in mid-November, he found "the reservoir almost full to the brim". The newspaper also reported that the nine compensation properties at Wheat Close were all occupied.[12]

In May 1930, the Yorkshire Post reported that schoolchildren at Hinchliffe Mill Council School had completed "an excellent papier-mache representation of Brownhill Reservoir [...] based chiefly on an ordinary survey map [and] has been accurately designed to scale". As all the children had taken part in the project, the reporter felt that the children would have "no excuse for falling in[to]" the real reservoir.[13]

One negative consequence of the reservoir was that Batley Corporation had purchased much of the land at the head of the valley which had previously been used for farming. The Leeds Mercury reported in July 1930 that price of mutton and eggs had risen steeply in Holme and Holmbridge, as the remaining farmers struggled to meet local demand for produce.[14]

The formal opening ceremony took place on Tuesday 24 May 1932, with Alderman J.E. Oldroyd again officiating. Using a gold key, he "opened the reservoir by releasing a valve to allow water to flow into the new 18-inch main connecting the reservoir with Batley, 17 miles away." A wall tablet commemorating the event was then unveiled in the valve house by the Mayor of Batley, Alderman E. Bruce.[15]

The new reservoir proved its worth during the drought of the following year, when it was reported that it was still holding enough water to "last nearly three months".[16]

The 1944 Whit Monday flash flood in the Holme Valley, which killed three people, saw a portion of Woodhead Road collapse near to the Victoria Inn. Two water mains, including the 18-inch main supplying Batley, fractured and began adding to the flood water. Fortunately, the reservoir's valve house had an automatic cut-off which engaged and reduced the flow. A bridge carrying the pipe over the River Holme at Holmbridge was also damaged. Temporary narrow pipes were used to bypass the fractures until the mains could be fully repaired.[17]

During the drought of 1949, Batley Corporation agreed to temporarily supply Huddersfield Corporation with 16,500,000 gallons over a period of 44 days.[18]