Brow Grains, on the moors above Meltham, is the site of a confluence of the southern conduit for Blackmoorfoot Reservoir and Brow Grains Dike.

Engineering works at the confluence historically controlled the ongoing flow of water to the reservoir and the dike downstream which feeds into Meltham Dike, then Hall Dike and finally Mag Brook before joining the River Holme at Magdale near Honley.

The confluence sluice gates and operating machinery are still mostly intact and are worth investigating as part of the Meltham Way. They are sometimes mistakenly referred to as flood gates, but their purpose was simply to divert the flow away from Blackmoorfoot Reservoir when required, as laid out in the terms of the Huddersfield Water Act of 1869 (section 42):

Whenever and so long as the water collected in the reservoir at Black Moor Foot is overflowing, the Corporation shall cease taking water directly from the Brow Grains Dike, and shall during the continuance of such overflow, by means of works to be constructed by them at or near the point where their conduit will intercept the water of the Brow Grains Dike, cause the water of that dike to continue its course down the same instead of into the said conduit.

Just above the confluence, Brow Grains Dike[1] flows over a small picturesque waterfall which is bridged by large stepping stones. 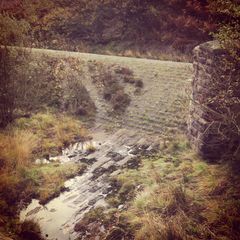 The confluence works were undertaken towards the end of the construction of Blackmoorfoot Reservoir. On 12 June 1876, the Waterworks Committee convened and visited the site, where "the engineers made a long examination of the grounds at and about the place where the stream is be to intersected by the conduit and ultimately the position of the weir and other works was settled, and the working drawings were arranged to be put in hand at once."[2]

The Committee returned to the site on 24 August as part of an inspection of the then completed Deerhill Reservoir and the ongoing work at Blackmoorfoot Reservoir.[3]

On 2 November, Mr. Stanways reported to the Committee that work was progressing well and that "the foundation across the water course is now worked out to a sound bottom, and ready for concreting."[4]

A few months later, the Chronicle recorded the death on 11 January 1877 of "Mr. John Bell [aged 37 of Golcar Brow], excavator, Brow Grains, Meltham."[5] It was reported that he was working alongside John Chapman and Charles Barber when, at around 4 o'clock in the afternoon, he suddenly collapsed and died. Dr. Hesslegrave attended and was of the opinion that the death was "the result of heart disease".[6]

Another inspection of the ongoing works took place on 16 February.[7]

In total, ten bore holes were sunk in the area around Brow Grains to increase the flow of water into the confluence, the first of which was a shaft 9 feet in diameter that was sunk to a depth of 171 feet, with adits added later to connect to the other nine bore holes. The site of the initial bore hole was decided upon after consultation with water diviner Henry Chesterton.[8]

In 1928, an electric-powered pumping station was erected at the main bore hole, which was operated during periods of high demand or drought.

On the evening of 6 April 1945, USAAF B-17G-65 Flying Fortress 43-37667 crash-landed on the moors above Meltham in poor weather, seriously injuring two of the five crew. Co-pilot 2nd Lieutenant Raymond Parks set off to find help and wandered down off the moors to Brow Grains, where he saw the lights of the Huddersfield Corporation Water Board cottage on Brow Grains Road. All five crew members were eventually brought down from the moors alive by two rescue parties.

This 1965 map shows the layout of the confluence, along with the route of a disused mineral railway, likely linked to coal mining in the area. The location of the bore hole pumping station building is shown in red.

Locations on the Meltham Way | Rivers and streams | Waterfalls and weirs
This page was last modified on 23 August 2019, at 11:25.