A small number of newspaper and journal articles suggest that James Bamforth's film The Kiss in the Tunnel (1898) was exhibited by Anglo-American Bio-Tableaux as early as late November 1898, sometimes alongside his short comic film The Honeymoon (1898). Research by Dr. Frank Gray indicates that G. A. Smith's version of The Kiss in the Tunnel was filmed in February 1899 and likely first exhibited on 20 March 1899 at the Canterbury Theatre, London.

The brief reference to "Kissing" in this article may be referring to the the Bamforth film. 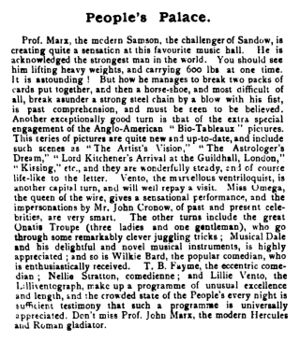 Prof. Marx, the modern Samson, the challenger of Sandow, is creating quite a sensation at this favourite music hall. He is acknowledged the strongest man in the world. You should see him lifting heavy weights, and carrying 600 lbs at one time. It is astounding! But how he manages to break two packs of cards put together, and then a horse-shoe, and most difficult of all, break asunder a strong steel chain by a blow with his fist, is past comprehension, and must be seen to be believed. Another exceptionally good turn is that of the extra special engagement of the Anglo-American “Bio-Tableaux” pictures. This series of pictures are quite new and up-to-date, and include such scenes as “The Artist’s Vision,” “The Astrologer’s Dream,” “Lord Kitchener’s Arrival at the Guildhall, London,” “Kissing,” etc., and they art wonderfully steady, and of course life-like to the letter. Vento, the marvellous ventriloquist, is another capital turn, and will well repay a visit. Miss Omega, the queen of the wire, gives a sensational performance, and the impersonations by Mr, John Cronow, of past and present celebrities, are very smart. The other turns include the great Onatis Troupe (three ladies and one gentleman), who go through some remarkably clever juggling tricks; Musical Dale and his delightful and novel musical instruments, is highly appreciated; and so is Wilkie Bard, the popular comedian, who is enthusiastically received. T. B. Fayme, the eccentric comedian; Nellie Stratton, comedienne; and Lillie Vento, the Lilliventograph, make up a programme of unusual excellence and length, and the crowded state of the People’s every night is sufficient testimony that such a programme is universally appreciated. Don’t miss Prof. John Marx, the modern Hercules and Roman gladiator.