Blackmoorfoot Reservoir (sometimes called Blackmoor Foot Reservoir) is a storage reservoir situated near to Meltham Cop and is 832 feet above sea level. With a capacity of over 700,000,000 gallons over an area of 101¾ acres, it is Huddersfield's largest reservoir.[1]

The reservoir was approved by the Huddersfield Water Act of 1869 and cost over £260,000 to construct. The civil engineers on the project were Thomas Hawksley[2] of London and George Crowther (senior partner of Messrs. G & G.H. Crowther) of Huddersfield.[3]

The ceremonial first sod was cut on 1 May 1871 and the foundation stone was laid by the Mayor and chairman of the Waterworks Committee, Alderman Wright Mellor, on 5 October 1872.

Two locomotives were used during the construction, one of which was named "Huddersfield".[4][5]

Work was completed in 1876 and the reservoir was filled to capacity by December.[1]

The land used for the reservoir contained several properties, which were presumably demolished prior to construction, including: Upper Wash, Lower Wash, Green Lane Bottom, Newland House, and Green Lane Top.

In June 1873, whilst work on the reservoir was still ongoing, teenagers Fred Rawcliffe and William Oldfield used a raft made from three planks to drift out onto the water, using lengths of wood as poles. As they reached a deeper section of water, they overbalanced — Oldfield managed to scramble to safety, whilst Rawcliffe disappeared under the water. A navvy named Charles Robinson dived in to try and find the boy, whilst weaver Henry Baxter used a long pole to try and locate the body. After nearly an hour, Rawcliffe's body was pulled from the reservoir.[6] 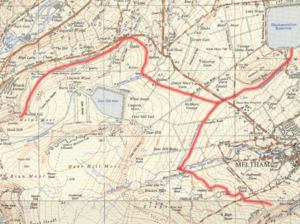 extent of the conduits

The water for Blackmoorfoot Reservoir is gathered via two contoured catchwater conduits which run for a total length of 5½ miles. The first conduit starts near Scout Holes, above Marsden, runs north-eastwards to Slack Farm before turning south to meet Bradley Brook, and then south-eastwards to Meltham where it joins the other conduit.

The second conduit begins below Royd Edge and flows westwards, passing under Wessenden Head Road, before meeting Brow Grains Dike, which flows down off Deer Hill Moss at a confluence. It then flows northwards to join the first conduit before flowing north-eastwards below the southern flank of Meltham Cop and finally entering the southern end of the reservoir. This second catchwater forms part of the Meltham Way.

According to the Huddersfield Chronicle, special "ladders" were installed to allow fish to pass from the reservoir back into the conduit.[7]