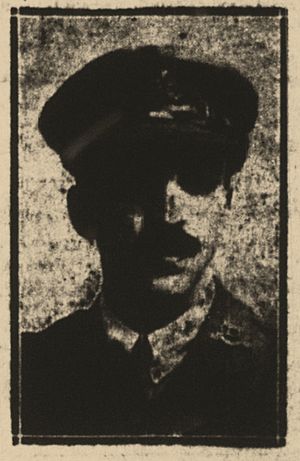 JOHNSON, BERNARD COPESTAKE. Lieutenant. 2/7th Battalion Duke of Wellington's Regiment. Lived Holmfirth. Had been Headmaster of Holmfirth National School for seven years prior to enlistment. Trained at St. John's College, Battersea and commenced as a teacher in London in 1900, remaining there for six years. He then took up a post at Kirkham, Lancashire before starting as Headmaster at Holmfirth National School. Married, with two children. Enlisted, 2.10.1914, and received his commission in the 7th Battalion Duke of Wellington's Regiment in September, 1915. Was wounded during the Battle of the Somme, in July 1916, and returned to France a fortnight before he was killed, during the Battle of Arras, on 14.5.1917, aged 37 years. Buried ECOUST MILITARY CEMETERY. Grave location:- Plot 2, Row A, Grave 38. 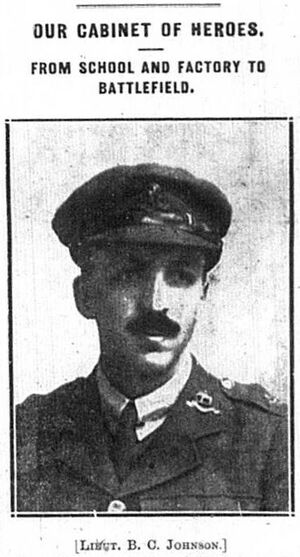 Bernard Copestake Johnson was born in South Normanton, Derbyshire in 1880, the first child of coal miner Edward and Georgina Johnson. In 1909 he married Bertha Lomax from Holmfirth and they had a daughter Dorothy born about 1910 in Greenhalgh, Lancashire where Bernard was teaching at the time. Subsequently, Bernard was appointed headmaster at Holmfirth National School. The 1911 census which included his name is highly unusual as it had been typed rather than handwritten.

Bernard joined the army in 1914 and was killed on 14 May 1917. The local paper announced his death and summarised his career as follows: “We regret to announce that Lieut. Bernard C Johnson was killed in action in France on Monday last (14 May 1917). He joined the Army on October 2nd, 1914 and received his commission in the 7th Duke of Wellington’s West Riding Regiment in September 1916. He was wounded in July 1916 in the Somme offensive and returned to France only a fortnight ago. The deceased officer who was 37 years of age, had been the headmaster of the Holmfirth National School for seven years prior to joining the Forces. He received his training at St John’s College Battersea and commenced his scholastic duties at London in 1900, remaining there for six years. He was then appointed to Kirkham, Lancashire afterwards taking up his position at Holmfirth.”

A subsequent article in the local paper gave further information: “Lt Bernard C Johnson of Holmfirth who was killed in action on the 14th ult, as reported in our issue of a fortnight ago, where we gave a short account of his scholastic career, was a man of many sided activities. He was a Sergeant of Volunteers in his College Regiment and obtained the crossed guns for marksmanship. In recent years he has been interested in the National Reserve, and was treasurer for the Holmfirth section. Some years ago he obtained the silver medal for proficiency in ambulance work. In his early years he was an all-round athlete and won prizes in the hurdle jumping and the high jump, while in swimming he obtained a Life Saving Society’s medal. Lieut. Johnson was keenly interested in the Swedish drill, and on joining the Army was instructor of the 2/7 Battalion Duke of Wellington’s West Riding Regiment, until he received his commission in September, 1915. Recently Lieut. Johnson has been acting as the Brigade supervisor of physical training and bayonet fighting.”

7th Battalion, Duke of Wellington's Regiment | Huddersfield and District Roll of Honour | People
This page was last modified on 21 May 2020, at 23:53.