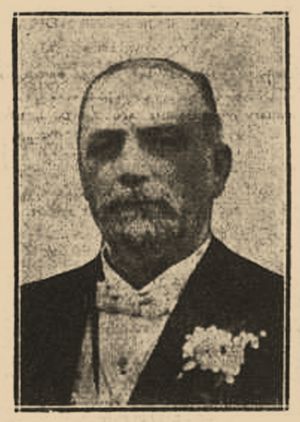 He was born on 1 January 1847, the son of tailor Joseph Oxley and his wife Sarah (née Heywood or Hayward), and was baptised on 23 May 1847 at Huddersfield Parish Church.

By the early 1850s, Joseph had set up a livery stables on West Parade[1] to supply horses and cabs, and Benjamin then built this business up until it "was the largest of its kind in Huddersfield", eventually forming Ben Oxley and Sons, Limited.[2]

In January 1868, he treated his workpeople to supper at the Old Hat Inn to celebrate his 21st birthday.[3]

He married Ellen Clayton of Lepton on 6 May 1868 at St. John the Baptist, Kirkheaton.[4] The couple had nine children, four of whom had died by the time of the 1911 Census.

By 1871, Benjamin was operating out of larger livery stables on the corner of Upperhead Row and West Parade. The Census of that year notes that he was employing 13 men and 1 boy. The 1881, 1891 and 1901 Censuses record the family's address as 29 West Parade, although the Oxley's also apparently owned farmed land in Highfields from as early as 1880.[13]

In November 1895, the Huddersfield Chronicle reported that he had held his third annual dinner at the Crown Hotel on Westgate for his 20 or so employees. After a substantial dinner, the tables were cleared and several of the men — including Edward Oxley and Joseph Oxley — sang songs, accompanied by Mr. W. Shoesmith at the piano.[14]

Ben Oxley and Sons, Limited was register as a private company in June 1899 with capital of £10,000 in £5 shares. The sons in question were Edward and Joseph, and Benjamin was described as a "livery stable keeper, job master, horse dealer, cab and 'bus porprietor, undertaker, funeral furnisher, etc."[15]

In 1900, he applied to build large livery stables at Highfields.

The 1911 Census records him as a livery stables keeper and farmer residing at Highfields.