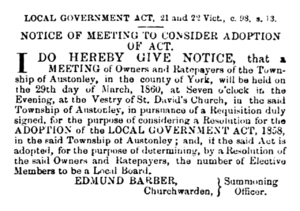 The Austonley Local Board was formed on 29 March 1860 after the Local Government Act 1858 was adopted by the township. The board initially comprised nine elected members.[1]

Austonley Local Board was abolished towards the end of 1894 when the district became an individual ward of the new Holmfirth Urban District Council.