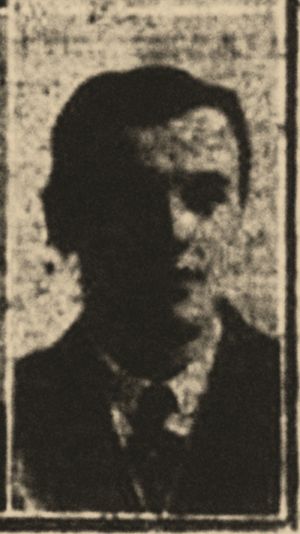 Arthur and Stanley Wilkinson were two of the sons of Charles and Ruth Wilkinson (nee Greenwood) who by 1911 were living at Rose Cottage, Outlane. The family had previously lived in the Colne Valley where Charles, who was born in Scammonden, worked as a cotton spinner. The couple had married in Halifax in 1886.

Stanley, who was born on 11 February 1888, was in fact baptised in Scammonden in August that year, when the family were living in Linthwaite. Arthur, born five years later, was baptised in Slaithwaite, in November 1893.

Charles ventured into self-employment, setting himself up as a grocer, before the 1901 census. This must have proved a success because the family moved to Outlane and were living in a six-roomed house by 1911. Ruth could describe herself as "Assistant in the Business" and their daughter, Mary, born a year before Stanley, was also employed in the business. Another son, Clarence, was only aged ten in 1911 and still at school.

Both Stanley and Arthur attended the Huddersfield College Secondary School so stayed on beyond the minimum school leaving age. Arthur eventually studied music, became a music teacher and organist at the Salendine Nook Baptist Church. He was a Fellow of the Royal College of Organists and a Licentiate of the Royal College of Music. Stanley became a clerk in the Huddersfield Building Society.

Stanley enlisted in the local Territorial Force battalion, the 5th Duke of Wellington's, in April 1915 but was probably too late to travel with the 1/5th when they went to France on 14 April 1915. He may have served only in Britain until the introduction of conscription in early 1916 because he eventually he served in the 2/5th, which arrived in France in January 1917. He was with this battalion in northern France when he was fatally wounded on 20 July 1918 while tending wounded men on the battlefield. He died the following day after over three years' service.

Arthur joined the army in June 1917, serving in the 1/7th Battalion, the West Riding Regiment the Colne Valley battalion of the Dukes. While in training he formed a concert party to entertain his fellow soldiers. He was killed near Ypres during the German spring offensive of 1918 after only ten months in the army.

Stanley is buried at the Terlincthun British Cemetery; Arthur has no known grave but is remembered on the Tyne Cot Memorial. Locally, Arthur is remembered on the memorial inside Salendine Nook Baptist Church and he and Stanley are on the family stone in the churchyard. Both are also on the Roll of Honour at Outlane Trinity Methodist Church.

WILKINSON, ARTHUR. Corporal. No 267618. 1/7th Battalion Duke of Wellington's Regiment. Born Slaithwaite, Huddersfield, in 1893. Second son of Mr and Mrs Clarence W. Wilkinson, Rose Cottage, Outlane. Educated Huddersfield College Secondary School. Was by profession a teacher of music and was organist at Salendine Nook Baptist Church. He was a Fellow of the Royal College of Organists and a L.R.C.M. Whilst in training he formed a concert party and also gave recitals in the vicinity of the camps. Single. Enlisted June 1917. Killed in action, 11.4.1918. Has no known grave. Commemorated TYNE COT MEMORIAL TO THE MISSING.