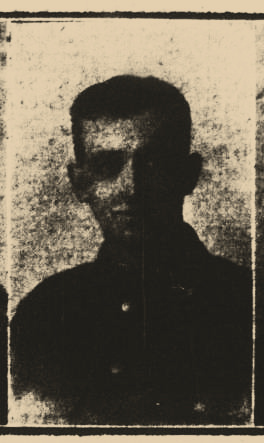 Arnold Dyson came from the heart of the village and it is there he is remembered: on the St. Stephen's plaque and on the family stone in the old graveyard of the Zion Chapel, where Arnold was baptised in 1895. The chapel is long gone and the burial ground is now a pleasant footpath through to West Street. Both chapel and church are not far from the Dyson family home on Thorncliffe Street where they were living in the 1890s and first decade of the 20th Century.

By the time Arnold joined the army they moved to Lidget Street into the more modern Norman Terrace, that group of houses near the Clock Tower. These were designed by the Manchester architect Edgar Wood for his uncle, Lindley factory owner James Neald Sykes, to accommodate a few of his workers.

Lindley-born Joe Dyson, Arnold's father, worked as a foreman in the Sykes factory on Acre Street. Daughter, Elsie, born in 1892, also worked in the card factory. In all, Joe and Mary Dyson had eight children, of whom three died young.

Arnold was born 3 March 1895 and baptised at the Zion Chapel in April 1895 and joined the chapel Sunday School in 1899 soon after his fourth birthday. He started at Oakes Infants School on 29 August 1899 and his parents' commitment to the Zion Chapel probably ensured he never attended the Church of England school on Holly Bank Road.

He seemed destined for a career a little removed from the factory floor: in 1911 he was apprenticed to a designer in worsted manufacture. However, the newspaper report of his death says he worked as a wire drawer in the Sykes factory so he may have changed his occupation before or after the start of the war. His signature on official papers seems small and neat as befits a person inclined towards art and design.

Like many young men at that time, Arnold enrolled in the army early in the war, on 3 September 1914 at the same time as Herbert Hey who lived on Thomas St and a number of other Lindley men, after a big recruitment campaign in Huddersfield. A neighbour of Arnold's, Herbert Holland at no. 15, enlisted the following day. This meant for them, and many others, joining the Territorial Battalion, 1/5th Duke of Wellington's.

We cannot know what was in Arnold's mind at that time. It was thought that the war would not last long, so a desire to take part in an exciting enterprise before it was too late may have motivated Arnold and many of his contemporaries. Patriotism in response to the huge recruiting drive mounted by the government — "Your Country Needs You" — probably also played a part. Arnold may also have, like others, felt anger at the German invasion of Belgium. As so many were enlisting it would have been easy to get carried along.

Whatever his reasons, on 14 April 1915, after training in England which included some time at the new camp at Clipstone, Mansfield, Arnold sailed with the Battalion from Folkestone aboard the SS Victoria to France. Like most of his fellows it was the first time he had travelled out of the country.

Seven months later on 8 November 1915, Arnold was wounded "In the Field" and died two days later in No. 17 Casualty Clearing Station. According to a nurse who wrote to the family, Arnold was too badly wounded in the chest to speak when admitted to the hospital. His total military service amounted to four hundred and thirty-four days, just over half spent in England.

Arnold is buried in the Lijssenthoek Military Cemetery, 12 kms west of Ypres, Belgium, along with over 8000 other British and Commonwealth, and some French and German, soldiers.

Among the effects sent back to the Dyson household was tobacco, cigarettes, some photos, a purse containing stamps and two medallions, which were probably of a religious nature.

His parents received the following letter from Nurse N. Wharton, Sister in charge at the C.C.S., which reads as follows, 'It is with much regret and the deepest sympathy that I send you very sad news. Your son passed quietly away yesterday afternoon. He never rallied after admission but got gradually worse. He was too ill to speak or send any message. He will be laid to rest in our soldiers' cemetery and a cross bearing his name, number and regiment will mark his grave. He will have a military funeral and every respect will be shown him. He bore his sufferings very patiently and never made a murmur.'

The Rev. J. Henry Martin, Wesleyan Chaplain attached to the 44th Field Ambulance also wrote, 'You will be sorry to hear of the death of your brave laddie, Private A. G. Dyson. I was sent for yesterday but it was too late. He was badly wounded in the chest and there was very little hope from the first. He very bravely bore his pain. I was in the Field Ambulance on duty when he died at the Casualty Clearing Station some miles away. He had no pain I gather and my friend, the Rev. J. H. Preston was with him when he died. I buried him yesterday in a beautiful place beside a wayside road with a hedge around.'

5th Battalion, Duke of Wellington's Regiment | Dyson (surname) | Huddersfield and District Roll of Honour | Lindley Roll of Honour | People
This page was last modified on 17 May 2020, at 12:08.