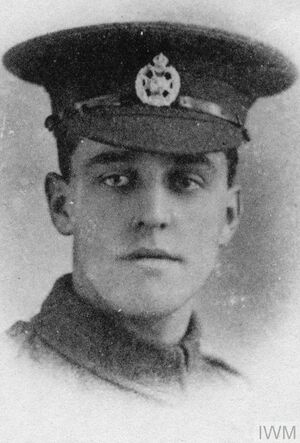 Arnold Fawcett was the son of William and Ellinor Fawcett, of 37 Syringa Street, Marsh, Huddersfield.

On the outbreak of war, a number of groups of workers came forward and joined battalions formed around their employment or trade, known as "Pals" Battalions. There was the so-called "Artists Rifles" and a number of "Clerks" battalions as well as "footballers" battalions and others. The British Post Office was the largest employer in Europe so it is no surprising that a number of its employees in London should form a battalion of the London Regiment, known as the "Post Office Rifles". However, it was in fact, a Volunteer Battalion originally established in the 1860s and since 1908 the Territorial 8th Battalion of the London Regiment.

When the War started the battalion attracted many Post Office employees and eventually two other Post Office battalions were formed.

It may not be surprising then that Arnold Fawcett, a "sorting clerk and telegraphist" at the Post Office should enlist in the 8th Battalion, the London Regiment. However, it is interesting to speculate whether he deliberately sort out this battalion or some recruiting officer — presumably in Huddersfield — pointed him in that direction.

Arnold was born on 9 January 1893, the second child of William and Ellinor Fawcett (nee Brooke) who had been married in late 1888. Their first son, Harry also known as Henry, born in 1890 and baptised at Holy Trinity Church, died on14 December 1903, while Arnold was only a few months old.

In 1891 William, Ellinor and the one-year-old Harry lived at Batley's Buildings on Brook Street, near Huddersfield railway station. William worked as a cloth finisher and had been born in Huddersfield in 1864 while Ellinor was born in Holmfirth a year later. When Arnold was born the couple were living in Albert Street, Lindley a road lost under the Infirmary car park.

On 16 January 1895 the Fawcetts had a daughter, Doris, who was baptised in St. Stephen's church on 17 February. By this time the family were living in George Street in the centre of Lindley. Another daughter, Winifred, was born at the end of 1900 and in the following census, the family address was given as 37 George Street. Three years later, according to bicycle club records, they were living at 10 George Street.

Arnold and presumably the rest of the children, attended the Church of England School on Holly Bank Road, a few yards from the family home on George Street. William became a member of the Lindley Bicycle Club and secretary of the Ancient Order of Foresters, a friendly society that had a meeting room on Wellington Street along with a number of houses it owned.

By 1911, the family address was given as 33 George Street: in 1901, they said they had only four rooms, in 1911 they claimed to have five. It seems likely, then, that they moved a few doors along for a slightly larger house. Number 33 had been the house of fellow bicycle club member Joe Dean, son of Lindley manufacturing chemist WH Dean.

Arnold was by then eighteen years old and working for the Post Office. He probably left school at age 14 and working as a sorting clerk and telegraphist suggests he had a good level of education, as did the fact that he later acted as secretary of the Lindley Adult School on Lyndhurst Avenue. He attended St. Stephen's and was a member of the Young Mens' Bible Class.

The family later moved to Syringa Street, Marsh, but seemed to have retained their connection with Lindley parish church, with Arnold continuing to attend the church.

Arnold enlisted in the army on 22 November 1915, before conscription. On his Medal Roll Index Card shows he only served in the 8th London but has two service numbers: the first is only 4780 which suggest he was one of the battalion's early recruits. It may be that the Post Office encouraged volunteers to enlist in the Post Office Rifles. The battalion was in France from March 1915 Arnold must have joined it later as a replacement.

The 1/8th Battalion, the London Regiment, the Post Office Rifles, was attached to the 47th (2nd) London Division, which was involved in the Battle of the Transloy Ridges, an action in the Battle of the Somme, in the first week of October 1916. Arnold was killed by a machine gun bullet in the neck having already been wounded in the shoulder and heading for the cover of a shell hole. His body was never found so his name is recorded on the Thiepval memorial to the missing.

Locally, Arnold is remembered on the memorial in Huddersfield Post Office and in St. Stephen's and on the family stone in the churchyard where his brother Henry and his mother and father, William and Ellinor, who died in 1945 and 1954, are buried.

FAWCETT, ARNOLD. Rifleman. No 372239. 8th (City of London) Battalion (Post Office Rifles). Born Albert Street, Lindley, 9.1.1893. Son of William and Ellinor Fawcett, 33 George Street, Lindley. Educated Lindley National Day School. Attended St. Stephen's Church, Lindley and was secretary of the Lindley Adult School. Employed as a sorting clerk and telegraphist at the Huddersfield Post Office. Enlisted 22.11.1915. Killed instantenously on 7.10.1916, aged 23, by a machine gun bullet striking him in the neck whilst making for a shell hole and already wounded in the right shoulder. Has no known grave. Commemorated THIEPVAL MEMORIAL TO THE MISSING.