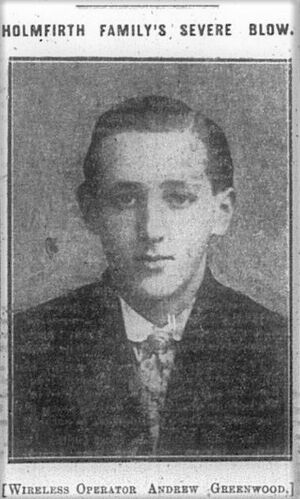 Andrew’s death and interment at the burial ground of Holy Trinity Church Holmfirth was reported by the local paper:

“The members of a well-known and highly respected Holmfirth family have the sympathies of a wide circle of friends in the bereavement which they have been called upon to experience. The circumstances are extremely pathetic. Within five weeks from joining the RNVR wireless operator Andrew Greenwood, son of Mr and Mrs Arthur Greenwood, of Quarry Mount, Holmfirth, passed away at the General Hospital at Croydon three weeks after attaining the age of 18 years. The first information Mr and Mrs Greenwood had that anything was amiss with their son was the receipt of a telegraphic message on October 9, stating that Andrew was seriously ill. They went to Croydon straightway and found Andrew, as reported, in a condition which occasioned the gravest anxiety, suffering, according to the medical testimony, from pneumonia. Everything that was humanly possible was being carried out to combat the disease with which Andrew was affected, but those persevering efforts to retain the young life were futile, and death took place last Thursday week. In due course the mortal remains were brought to Holmfirth and the internment took place at Holmfirth Parish Church burial-ground last Tuesday. Amongst the mourners were 6 RNVR men, who had come north especially for the purpose of attending the funeral and the relatives were also accompanied by many friends of the family. The last rights were performed by the Rev JWS Walker vicar of Holmfirth and the funeral was of the most impressive nature. There were many tokens of sympathy for the relatives and admiration of the boy who had thus died in the service of his King and Country, amongst these being a wreath from Burnlee AFC of which organisation Andrew was an active member, one from his workmates at the mill, and another from a number of personal friends in Holmfirth. The deceased sailor- who it will be noticed bore the same name as his grandfather, the well-known county cricketer. received his education at Upper Thong National School; he was also closely connected with St John's Sunday school and church, and was at one time a member of the choir. After leaving the day school he entered the service of Messrs T and J Tinker and was with his father in the finishing department at Bottoms Mill prior to joining the forces. A cheerful, well-behaved, smart youth Andrew was popular wherever he went and his loss is keenly felt in many walks of life.”

Huddersfield and District Roll of Honour | People | Royal Naval Volunteer Reserve
This page was last modified on 19 May 2020, at 19:40.