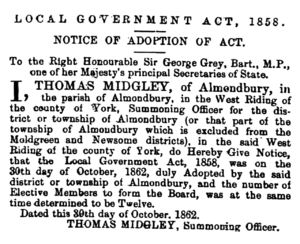 Almondbury Local Board was the local authority body primarily responsible for issues relating to public health in the township of Almondbury and was formed on 30 October 1862 with an initial membership of 12.

The following were reportedly the first members of the local board:[1]

One of the final acts of the local board was to order 150 yards of iron pipes to help distribute a new water supply which had been located by well sinkers Messrs. Job Dodson and George Sykes at the top of the town. The pair had found "no fewer than eight springs or jets of pure water" at a depth of 18 feet that provided an aggregate yield of about 8 gallons per minutes, which was "considered sufficient to supply the whole of that portion of the township".[2]

The Almondbury Local Board District was abolished on 7 September 1868 when the township became part of the combined Almondbury & Newsome Ward within the new Municipal Borough of Huddersfield.

The extent of the local board district (taken from the early 1890s O.S. maps) is given below. The district is shaded in green and the entirety of township of Almondbury is shown in red.