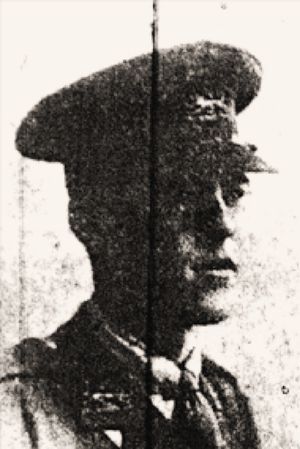 Allen Mortimer Haigh was born on the 3 August 1898 at the family home, The Holly, Marsh and was baptised in St. Peter's in Huddersfield on 3 September.

His father Edward was a wholesale clothier, from Edgerton. His mother Kate, was the daughter of James Crosland, a manufacturer, and the couple were married on 29 June 1887 at All Saints, Paddock. By the time Allen was born they already had two children: Dorothy, born in 1889 and John born in 1897. Two boys, born in 1891 and 1894, had died in infancy.

The 1901 census found the family in Llandudno staying at a boarding house on Glanymor Terrace. They had brought the family nurse, Emily Parking aged 29, to look after two-year-old Allen. Their first Huddersfield home was Wellfield House on the New Hey Road, not far from the Bay Horse Inn. They soon moved to The Hollies, also on the New Hey Road and had been there at least since the christening of John, also at St. Peter's, in 1896.

It has proved impossible to locate the Haigh family on the 1911 census (except John who was away at school in Sedbergh) and they were still living at The Holly and another child, Joyce Crosland had been born.

Allen's early schooling remains a mystery, but we know that he followed in his brother John's footsteps to attend Sedbergh School in Cumberland, between 1912 and 1914. At Sedbergh he was in School House and played in the back row for the 3rd XV and was described as "conscientious and dutiful". In November 1915, soon after Allen had returned home, Edward Haigh died at the age of fifty-eight and was buried in the family grave at Salendine Nook Baptist Church.

Too young to enlist when the war began in August 1914, Allen worked for in the family wholesale cloth business, and it was not until he was eighteen in August 1916 that he enlisted in the West Riding Regiment as a private. Brother John, meanwhile, enlisted in the 1/5th Battalion of the Duke of Wellington's early in the War and went to France with the Battalion on 15 April 1915, as a lieutenant and was wounded in 1918.

Selected for officer training, Allen went to Bristol University Officer Cadet Corps. He was gazetted 2nd Lieutenant in the King’s Own (Royal Lancashire Regiment) in late September 1917 and arrived in France the following Christmas Eve.

Attached to the King's Own Yorkshire Light Infantry, Allen was killed at Neuve Eglise. Having learned that his servant lay wounded in No Man's Land, he was shot dead attempting a rescue. It was less than four months since he arrived at the front. He was nineteen years and eight months old.

Allen has no known grave, no doubt due to the way the front line was shifting rapidly at the time in the face of the German advance, so is remembered on the Tyne Cot Memorial to the missing and on the Sedbergh Roll of Honour, and locally in St Stephen's. Allen is also remembered in the Salendine Nook Baptist Church graveyard. In his will, Allen left £243.

John Haigh survived the war, rising to the rank of captain. The family home moved from The Hollies, to Brooklyn on Thornhill Road.