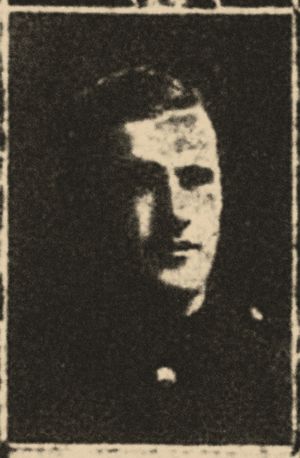 They were living at 2 Cowrakes Road when Allen started school at Oakes Infants on Wellington Street on 7 July 1901.

Although they had a total of seven children, all of whom had survived, the marriage did not, and in 1911 when they were living at 17 Union Street, Lindley, Fanny was described as "Separated". With eight people living there, even with five rooms, number 17 must have seemed cramped. By the time Allan enlisted, the family had moved again and Fanny was living at 12 Yew Tree Road, Birchencliffe.

In 1911, Allan, 16, was an "Iron Turner's Apprentice" working at James Hopkinson and Co. Ltd. in the centre of Birkby. Two of his brothers, Percy and Thomas, were wiredrawers in a "Card Clothing Factory", presumably the English Card Clothing Company (owned by the Sykes family) in Acre Street, Lindley and a very short distance from Union Street. Two sisters worked in textiles, one a "twister", and Lousia, age 13, a bobbin winder in "worsted manufacture".

Allan was a member of Lindley Wesleyan Church where he had been baptised.

Allan enlisted in August 1914 in the 8th Battalion, the Duke of Wellington's. He went with the battalion to Gallipoli a year later in August 1915 where he was wounded and suffered frostbite.[1] He was there until July 1916 when the battalion shipped to France, to reinforce the Third Army on the Somme.

Allan died 28 September 1916 on the third day of the Battle of Thiepval as a result of a shell burst and has no known grave; Harold Thorpe, also from Lindley, died on the same day. Both mens' names are on the memorial in St. Stephen's and at Thiepval, and Allan's name is also in the church at which he was baptised and subsequently attended, the Methodist Church, East Street, Lindley.

No service records survive for Allan.