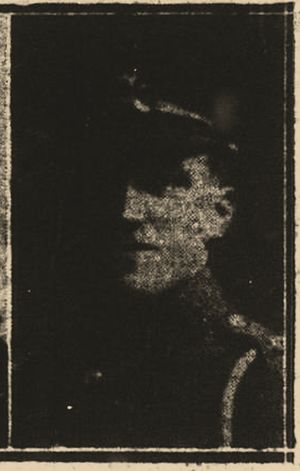 Albert Moorhouse was the son of John and Ellen Moorhouse, of 35, Quarmby Fold, Lindley.

John Moorhouse, Albert's father, had been a coachman in 1901 and his eldest son, John Robert, a groom. Albert, born on 10 December 1893, was still at Oakes Council School in 1901. By 1911 John senior was a farmhand though the family still lived in Quarmby Fold. John Robert, on the other hand, had become a chauffeur and it is possible that John senior was unable to adapt to new skills required as horse-drawn coaches were phased out in favour of the new motor-car.

Albert was five years older than George Moore who lived a few doors along at no. 49 and died in 1916. They almost certainly went to the same school and knew each other. The families would have been able to offer each other comfort and support when the bad news came.

Two of their neighbours were listed as employers and had live-in cooks in 1901. It is possible that John and eldest son worked for one of these, probably Sam Haigh the woollen Merchant at Pond House, though we cannot know for sure.

Although John had been born in Yarm, County Durham, they had been in Lindley at least for the twenty-two years since their first child. Out of ten children they had lost three in infancy.

While John worked as a chauffeur, the other adult children in 1911 worked either in cloth manufacture or as in the case of twenty-year old Leonard, as a tailor's cutter with a wholesale clothier; this may have been Haigh, the "woollen merchant" in nearby Pond House. Albert worked as a "wool twister" for Smith and Calverley at Plover Mills, on Plover Road.

Albert's army service was counted from 5 December 1915 possibly under the Derby Scheme so he was probably not actually called up until early in the New Year.

The Machine Gun Corps was formed from machine-gunners in each regiment after September 1915; manning machine guns one of the more dangerous roles in the front line: machine gun positions were particularly target by enemy artillery and mortar fire. The 63rd Company was formed in Grantham and moved to France in March 1916.

In October 1917, Albert was awarded the Military Medal.

Albert died in September 1918 at Incy-en-Artois, during the advance to retake the land lost in the German March-April offensive. The memorial records the names of 9000 men who died in the Picardy and Artois region after August 1918 and have no known grave.

Locally, Albert is remembered on the memorial in St. Stephen's and on the Roll of Honour of the Zion Chapel, where he attended Sunday School.

None of Albert's brothers died in the Great War.