Items in the Maps Collection

1965 map of the confluence at Brow Grains 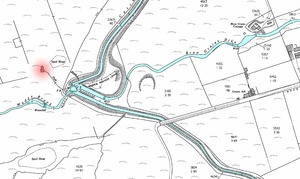 Map showing the layout of the confluence at Brow Grains. The bore hole pumping station building is highlighted in red. The map also shows the route of a disused "mineral railway".

1906 Ordnance Survey map showing the location of the upper lake in Beaumont Park.

1965 map of the Beaumont Park Lake 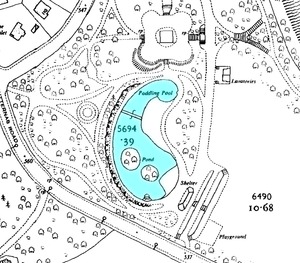 1965 Ordnance Survey map showing the location of the upper lake in Beaumont Park.

Built prior to the mid 1840s, the Belthel Buildings in Netherton were originally twelve properties, with one row of six facing onto Nether Moor Road and a further six built into the hillside below them. The houses were built by South Crosland builder… 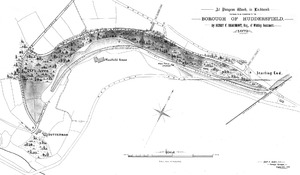 1879 map showing the extent of Dungeon Wood and the proposed section to be included in Beaumont Park (shaded in a darker grey). The map has been kindly provided by the Friends of Beaumont Park. The map was prepared by the Borough Surveyor, John Henry…

The approximate location of the station house of Woodfield Station is shown in red. The location has been approximated from a 1879 map of Dungeon Wood. The station famously opened at the start of June 1874 and then closed at the end of the same… 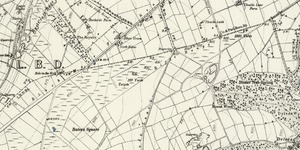 1894 OS map showing the location of the Rifle Butts 1,000 yard rifle range on Crosland Moor, used by the local Volunteer Rifle Corps in the late 1800s. Presumably anyone using Sandy Lane (which runs up to the Sands House Inn) would have been dodging…

1894 map of the Harden Moss Racecourse

1894 Ordnance Survey map showing the short-lived Harden Moss Racecourse, situated above Meltham and Holmfirth on the Greenfield Road. Solicitor Frederick Robert Jones (1814-1896) had hoped to build a racecourse next to his "model farm" at Harden Moss… 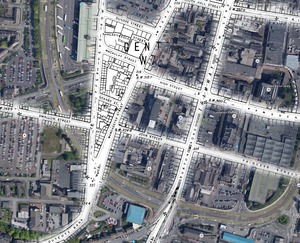 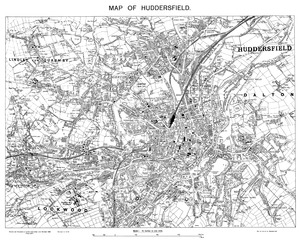 1919 map of Huddersfield published by Alfred Jubb & Son. A detailed PDF version and a high-res PNG image can be downloaded from Huddersfield Exposed. 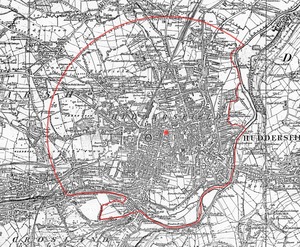 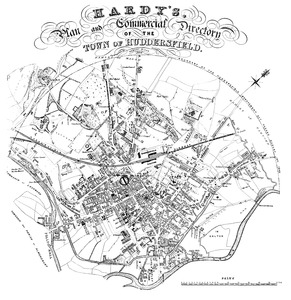 Surveyed by Robert Nixon in 1850 and reproduced in Roy Brook's "The Story of Huddersfield". A high-resolution PDF version of the map can be downloaded from here. 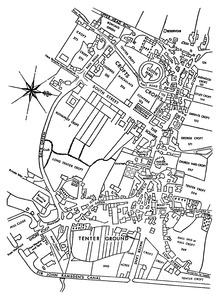 Town plan of Huddersfield from 1778. 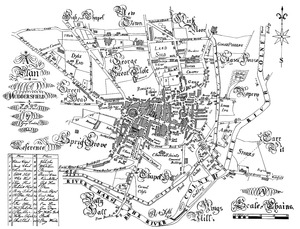 George Crosland's 1826 map of Huddersfield. A PDF version of the map can be downloaded from here. 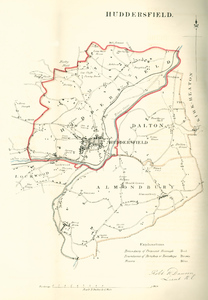 Map of the proposed Parliamentary Borough of Huddersfield from Parliamentary Representation: Reports from Commissioners on Proposed Division of Counties and Boundaries of Boroughs (1832)

Street Map of Huddersfield and District 1947 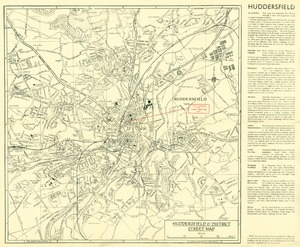 The map was given away by Hubert Armitage, F.A.I., "auctioneer, valuer and estate agent" of Estate Buildings, Railway Street, Huddersfield. 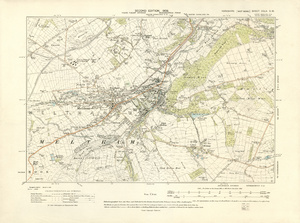 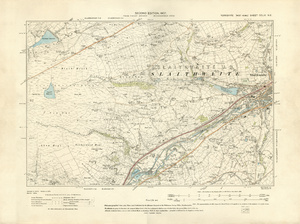 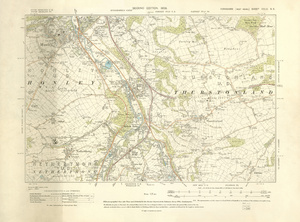 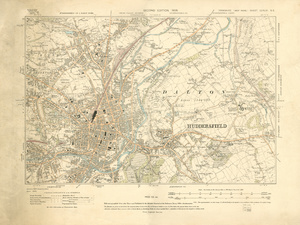 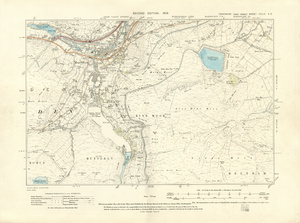 Coloured version of the Ordnance Survey 1908 Yorkshire Sheet CCLIX S.E. covering Marsden and and the northern section of the Wessenden Valley. At the time the map was surveyed, Butterley Reservoir was under construction and the temporary tramway for… 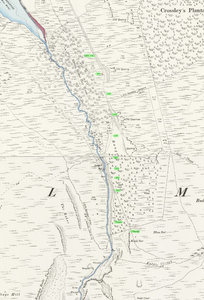 Detail of the Ramsden Clough Rifle Range, taken from the O.S. CCLXXII.10 and CCLXXII.14 sheets published in the early 1890s. The features of the range (targets, flag and distances) are highlighted in green. 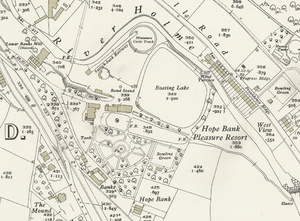 Section of the Yorkshire CCLX 11 sheet, published by the Ordnance Survey in 1932, showing the layout of the Hope Bank Pleasure Resort. 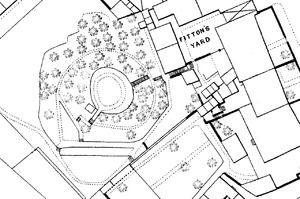 Detail from the 1890 O.S. Town Plan of the area once known as Mount or Ark Hill Mound, which is suspected to be the location of an early motte and bailey castle.